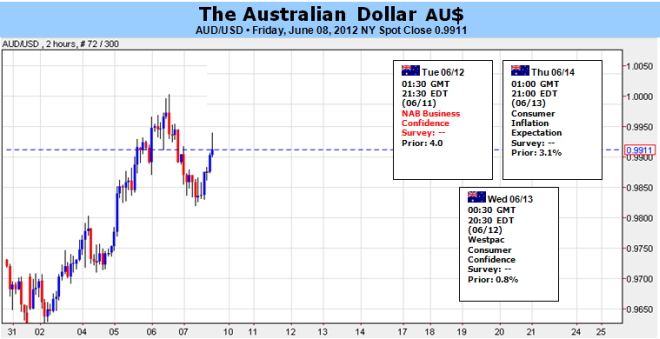 The Australian dollar fell back from a fresh monthly high of 1.0002 as market participants scaled back their appetite for risk and the high-yielding currency may face additional headwinds in the week ahead as the Reserve Bank of Australia continues to embark on its easing cycle. Despite the slew of positive developments coming out of the $1T, the RBA held a dovish tone for monetary policy after lowering the benchmark interest rate by another 25bp in June, and it seems as though the central bank will take additional steps to stem the downside risks for the region as China – Australia’s largest trading partner – faces an increased risk for a ‘hard landing.’

Indeed, the People’s Bank of China lowered borrowing costs for the first time since 2008 in an effort to combat the slowing recovery, and the weakening outlook for global trade may encourage the RBA to further ease monetary policy as growth and inflation tapers off. According to Credit Suisse overnight index swaps, investors are pricing an 86% chance for another 25bp rate cut at the July 3 meeting, while market participants see the cash rate falling be 100bp over the next 12-months as the central bank keeps the door open to expand monetary policy further. As commercial banks in Australia remain reluctant to pass on lower borrowing costs, we should see the RBA continue to carry out its series of rate cuts, and interest rate expectations certainly dampen the appeal of the Australian dollar as the central bank persistently highlights the downside risks surrounding the region. In turn, we may see consumer inflation expectations continue to come off in June and the weakening outlook for price growth would certainly broaden the RBA’s scope to expand policy further as the central bank sees inflation tracking around the lower end of its 2%-3% target range.

As the relative strength index on the AUDUSD maintains the downward trend from February, we would need to see a topside break in the oscillator to see a meaningful correction in the exchange rate, and we may see the pair face range-bound prices in the week ahead as it struggles to put in a close above the 38.2% Fibonacci retracement from the 2010 low to the 2011 high around 0.9930-40. In turn, we may see the AUDUSD revert back to the 50.0% Fib around the 0.9570 figure, but the drop in risk-taking behavior may produce fresh 2012 lows in the exchange rate as market sentiment continues to drive price action for the major currencies. – DS