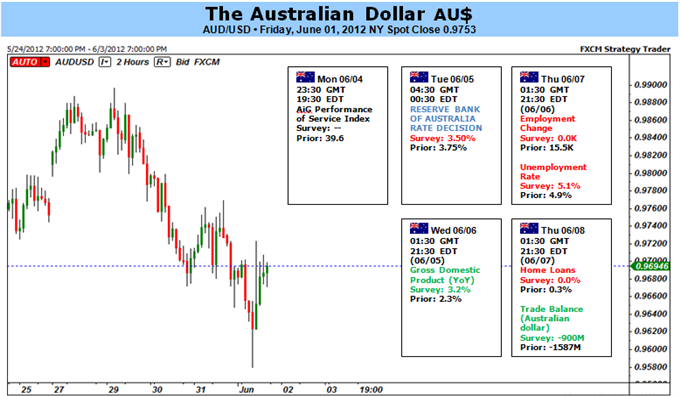 The Australian Dollar had a mediocre week, finishing in the middle of the pack among the major currencies, while shedding 2.70 percent to the top performer, the Japanese Yen. The Aussie closed the week unchanged against the Euro, which comes as no surprise considering both currencies’ respective issues (diminishing Asian growth prospects versus the beginning parts of a bank run in Europe). Still, the Australian Dollar has been hit two-fold on the same issues: diminishing Chinese growth prospects have made the Australian economy look vulnerable to further declines; and the Euro-zone crisis is stoking massive US Dollar demand, which is hurting higher yielding assets like the Aussie. Overall, the Aussie is a weak currency; but there is hope this week.

First, it is worth considering Friday’s US Nonfarm Payrolls report for May. With jobs growth so low and economists consistently overestimating data over the past few months, it’s clear that the US economy is weaker than previously portrayed. Accordingly, it is looking like the Federal Reserve, if it sticks to its word, will implement another quantitative easing package. This in and of itself – an expectation of a major liquidity injection – could bolster investor sentiment and boost risk-appetite going forward (holding all else equal). At minimum, the Aussie could post gains against the US Dollar in a less volatile trading environment, the European crisis permitting.

With that said, the Australian Dollar has its own central bank to serve as a catalyst for another surge. The Reserve Bank of Australia will meet on Tuesday, and policymakers are expected to cut the key interest rate by another 50.0-basis points, the second such move this year. Back in November, the RBA’s key interest rate was 4.75 percent; it currently sits at 3.75 percent and should be at 3.25 percent by the start of European trading on Tuesday. The Credit Suisse Index Swaps suggest that there is a 51.0 percent change of a 50-bps cut, and 149.0-bps are being price out of the Aussie over the next 12-months. We find, however, that this seems a little over done, and only a 25.0-bps cut is likely. Thus, with the market positioned for a 50.0-bps cut, many could be disappointed, causing the Aussie to rally a bit as traders reduce their bearish Aussie bets.

Also due this week is the first quarter growth reading, which is due on Tuesday as well (in GMT; Wednesday local time in Australia). This however is likely to weigh on the Aussie, given Asian growth readings from the first quarter. On a quarterly-basis, growth is forecasted to tick up by 0.5 percent, and on a yearly-basis it is forecasted to tick up to 3.2 percent; comparatively speaking, growth rates were 0.4 percent m/m and 2.3 percent y/y, respectively. Given weak Chinese growth, we believe that this forecasts overestimate the strength of the Australian economy; and the print should be bearish for the Australian Dollar.

Lastly, on Thursday (again, in GMT; Friday local time in Australia), the May labor market reading is due. According to a Bloomberg News survey, the economy did not add or drop any jobs last month, and the Unemployment Rate will tick up to 5.1 percent from 4.9 percent as such. We warn though that recent estimates provided have been poor; no aggregate forecast has been within 15K of the actual reading since December 2011. Ultimately, we find that some jobs could have been lost, which is bearish for the Australian Dollar as well.

Overall, the picture is very mixed, with Australian data and global sentiment weighing on the Australian Dollar’s growth prospects, while a less-dovish than expected RBA and a weak US Dollar (prompted by Fed QE3 hopes) could spur some short-covering in the Aussie. We remain cautious, and we maintain our bearish bias, but for this week, given the enormous background noise influencing the currency markets, we adjust this week’s Aussie forecast to neutral, given the positive and negative influences that will weigh over the coming week. –CV