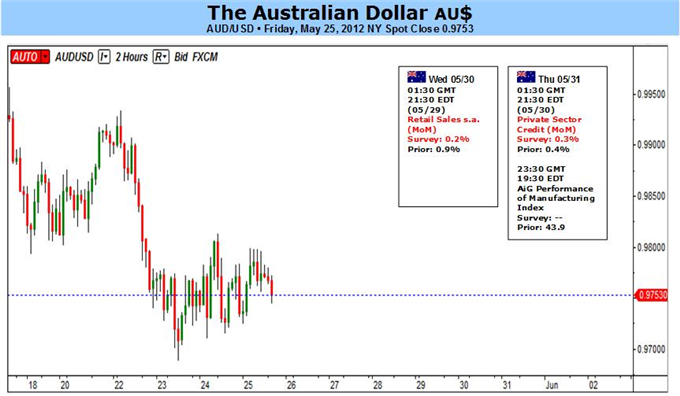 The Australian dollar slipped to a fresh yearly low of 0.9689 as market participants continued to scale back their appetite for risk, and the high-yielding currency may face additional headwinds next week should the flight to safety gather pace. Although the relative strength index on the AUDUSD continues to show an oversold signal, we need to see the oscillator climb back above 30 to see a meaningful correction in the exchange rate, and the pair may continue to fall back towards the 0.9600 figure as it searches for support.

Nevertheless, the economic docket for the following week is expected to show a rebound in building activity paired with a rise in business investments, a round of positive developments may prop up the Australian dollar, but we remain bearish against the high-yielding currency as market participants see the Reserve Bank of Australia expanding monetary policy further in the second-half of the year. According to Credit Suisse overnight index swaps, investors are now pricing a 35% chance for a 50bp rate cut in June versus the 73% seen during the previous week, while borrowing costs are still projected to fall by more than 125bp over the next 12-months as the central bank highlights a weakened outlook for the $1T economy. With RBA Governor Glenn Stevens scheduled to speak at the beginning of the following week, a fresh batch of dovish commentary may overshadow positive developments coming out of the region, and we may see the aussie-dollar extend the decline from earlier this month as interest rate expectations deteriorate.

As the AUDUSD holds above the November low (0.9662), there’s speculation that the aussie-dollar is carving out a short-term bottom going into the end of May, but the headline-driven market may continue to push the exchange rate lower as the ongoing turmoil in the world economy saps risk-taking behavior. In turn, we may see the AUDUSD mark fresh lows in the week ahead, with an RSI break above 30 suggesting that a correction may be under way. - DS