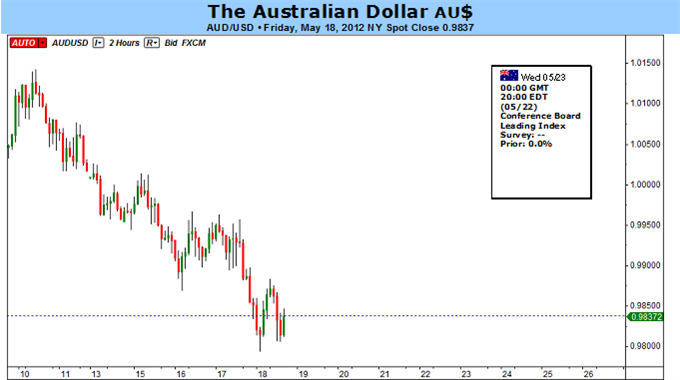 The Australian dollar slipped to a fresh yearly low of 0.9794 as traders scaled back their appetite for risk, and the high-yielding currency may face additional headwinds in the week ahead as investor confidence remains frail. Beyond the negative headlines surrounding Europe, the slowing recovery in China – Australia’s largest trading partner – certainly cast a dour outlook for the $1T economy , and the fundamental developments on tap for the following week may stoke fears of a ‘hard landing’ amid the ongoing weakness in manufacturing activity.

After lowering the reserve requirement ratio by 50bp, People’s Bank of China Governor Zhou Xiaochuan called for further reforms amid the ‘structural imbalances’ in the capital markets, and the central bank is widely expected to take additional steps later this year in an effort to engineer a ‘soft landing.’ In turn, the Reserve Bank of Australia is widely expected to follow suit, and we may see the central bank continue to embark on a very aggressive path as the outlook for growth and inflation deteriorates. According to Credit Suisse overnight index swaps, market participants are pricing a 73% chance for another 50bp rate cut in June, while borrowing costs are expected to fall by more than 125bp over the next 12-months as Governor Glenn Stevens adopts a highlight dovish tone for monetary policy. In contrast, 25 of the 28 economists polled by Bloomberg News see the RBA keeping the interest rate on hold next month, and we may see the central bank resume its easing cycle in the second-half of the year as the outlook for global growth remains clouded with high uncertainty.

Although the AUDUSD remains oversold, we expected to see further declines in the exchange rate until the relative strength index crosses back above 30, and the bearish sentiment underlining the high-yielding currency should gather pace next week as the flight to safety gathers pace. At the same time, interest rate expectations may deteriorate further as we’re expecting to see more dismal data coming out of China, the aussie-dollar may continue to give back the rebound from back in November as it struggles to find support. – DS