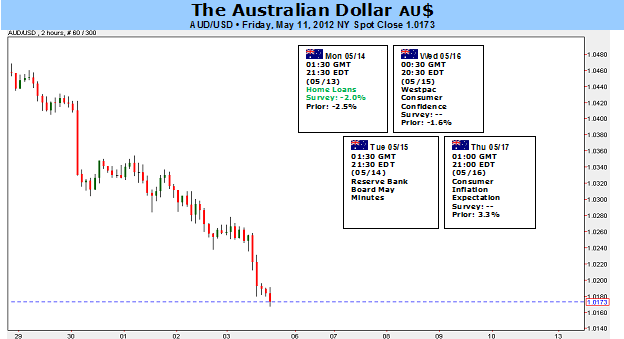 Australian Dollar May Struggle To Find Support On RBA Policy

The Australian dollar came under pressure despite the slew of positive developments coming out of the $1T economy, and the high-yielding currency may depreciate further in the week ahead should the Reserve Bank of Australia talk up speculation for additional monetary support. Indeed, Australian Prime Minister Julia Gillard said the RBA has ‘maximum room’ to adjust monetary policy as the government shoots for a A$1.54B budget surplus for the fiscal year starting July 1, and the central bank may embark on a series of rate cuts in an effort to encourage a stronger recovery.

As the RBA meeting minutes highlight the biggest event risk for the following week, we should see the central bank maintain a dovish tone for monetary policy, and the fresh batch of central bank rhetoric is likely to drag on the exchange rate as market participants anticipate to see lower borrowing costs in 2012. According to Credit Suisse overnight index swaps, market participants are pricing a 63% chance for a 25bp rate cut in June, while they still see the benchmark interest rate falling by more than 75bp in the next 12-months as the central bank strikes a cautious tone for the region. Moreover, a survey by Bloomberg News shows 25 of the 28 economists polled expect the RBA to keep the cash rate on hold at 3.75%, but we should see Governor Glenn Stevens carry the easing cycle into the second-half of the year as the slowing recovery in China – Australia’s largest trading partner – dampens the outlook for growth and inflation. At the same time, the flight to safety could further limit any advances in the AUDUSD as heightening fears surrounding the sovereign debt crisis continues to drag on market sentiment, and the shift away from risk-taking behavior may gather pace next week as European policy makers struggle to stem the threat for contagion.

As the AUDUSD fails to maintain the range-bound price action from April, we should see former support around 1.0200 act as new resistance, and we may see the pair threaten the 38.2% Fibonacci retracement from the 2010 low to the 2011 high around 0.9930-50 as it searches for a floor. However, we will be keeping a close eye on the relative strength index as it approaches oversold territory, but a break below 30 should send the pair even lower as market participants turn increasingly bearish against the Australian dollar. At the same time, we’re still holding onto our short AUDNZD position from 1.2814 as the pair looks poised to mark fresh lows for 2012, and we will build up this position on the way down as it carves out a lower top in May. - DS