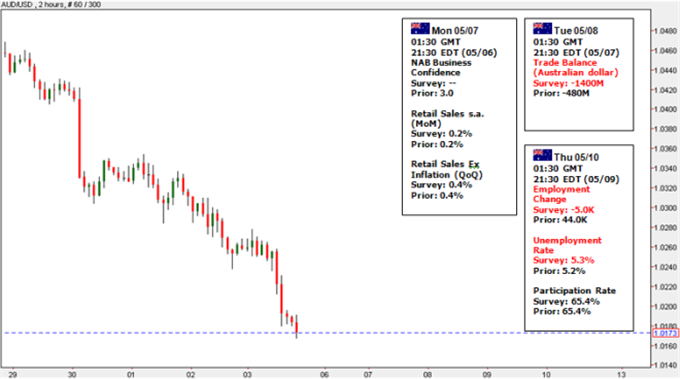 The Australian Dollar finished last week with the worst five-day performance in seven months against its leading counterparts as the central bank unexpectedly slashed interest rates by a hefty 50 basis points while risk appetite unraveled across financial markets, sapping overall demand for high-yielding currencies. Looking ahead, another difficult week appears likely as homegrown economic data threatens to bolster the case for further easing while the sentiment landscape remains vulnerable.

On the domestic front, the RBA clearly signaled its intentions for easier policy but offered little forward guidance on where rates are expected to go in the near term. The policy statement released early in the week focused on establishing the logic justifying the 50bps reduction. The monthly policy statement published on Friday slashed growth and inflation forecasts but gave no clues about additional easing, arguing that headline inflation will average in the 2-3 percent target range through the end of next year given the current interest rate setting of 3.75 percent.

From here, the outlook on RBA policy is likely to turn data-dependent as traders attempt to mirror the central bank’s own reasoning on whether the degree of slowdown playing out in the economy warrants additional support. Next week’s calendar offers a good measure of market-moving even risk, with Retail Sales, Building Approvals, Trade Balance and Business Confidence reports all set to cross the wires. The spotlight is likely to fall on April’s Employment report. The economy is expected to shed 5,000 jobs, bringing the unemployment rate higher to 5.3 percent. April’s PMI surveys suggest manufacturing- and service-sector hiring contracted at the fastest pace since December, when headline figures showed the economy lost 36,600 jobs, so the threat of a downside surprise that stokes RBA cut bets for June and weighs on the Aussie appears significant.

Meanwhile, the Australian unit remains closely correlated with underlying risk appetite trends. A trade-weighted index of its value against a basket of top currencies continues to show highly elevated correlation readings with the MSCI World Stock Index (now at 0.79 on 20-day percent change studies). This means prices are likely to remain sensitive to US economic data – where PPI and UofM Consumer Confidence figures headline the docket – as well as a busy Fed speaking calendar as traders continue to gauge the degree to which a choppy recovery in North America can offset headwinds from Europe. Head-of-state elections in France and Greece as well as regional polls in Italy and Germany over the weekend will establish the tone for risk appetite trends, reflecting the shifting political landscape in the region that may undermine already precarious debt crisis-fighting negotiation efforts. – IS