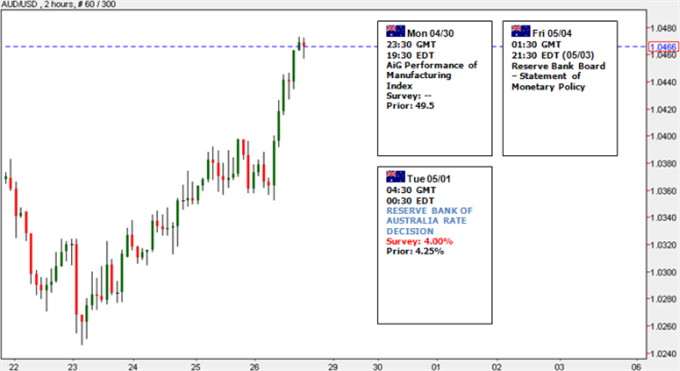 The Australian dollar is markedly stronger at the close of trade this week with an advance of nearly 0.90% against the greenback. The aussie’ s advance on Friday saw the high yielder briefly break above the April high at 1.0465 with the pair holding just below key Fibonacci resistance at 1.0475. Although our long-term outlook for the high yielder remains weighted to the downside, the medium-term forecast is clouded ahead of key economic releases next week with the RBA interest rate decision and a fresh monthly opening range likely to offer clarity.

Preliminary manufacturing PMI data out of China early in the week put a bearish tone on broader risk assets after the report showed the manufacturing sector contracted for a sixth month in April. Ongoing concerns regarding Chinese growth prospects have continued to weigh on the aussie and as Australia’s largest trade partner, a “hard landing” in the world’s second largest economy would have larger implications for the domestic economy. Weaker than expected 1Q CPI data on Tuesday sent the aussie even lower with the print all but guaranteeing an interest rate cut from the RBA next week as the pace of inflation remains well below expectations. However a pivotal FOMC rate decision on Wednesday shifted the tides after central bank Chairman Ben Bernanke cited that the Fed was “prepared to do more” should economic conditions in the US deteriorate. The remarks come despite upgrades in the outlook for growth, inflation, and employment from the Fed with the greenback coming under pressure as investors scaled back dollar holdings. A disappointing print on US GDP data on Friday amplified the dollar sell-off with the aussie breaking above the April high at 1.0465 just ahead of the close in New York.

Looking ahead, all eyes will be fixated on the RBA interest rate decision early in the week with the central bank almost certain to reduce the cash rate. The question is- By how much? Credit Suisse overnight swaps are factoring in a 132% chance of a 25 basis point cut (32% chance of 50bp cut) with twelve month expectations calling for another 109bps in cuts. It’s important to note however that a 25bp rate cut may be largely priced in at this point and the downside pressure from such a move may be tempered. A cut of more than 25bps is likely to trigger a more substantial move and could see the aussie retest key daily support at 1.0360. The most likely outcome is that the RBA will cut by rates 25bps in both May and June as the central bank looks to reduce the risk of sending the wrong signal and further dampen business confidence. The monetary policy statement is set for release later in the week with investors closely eyeing the RBA’s most recent assessment of the economy.

From a technical standpoint, the AUDUSD broke above key resistance at the three-way confluence of the 200-day moving average, channel resistance dating back to March 6th, and the 50% Fibonacci retracement taken from the December advance at 1.0360. The breach prompted a rally in the aussie that saw the exchange rate tag the 38.2% retracement at 1.0475 before closing at the previous April high at 1.0465. With the close of the month approaching on Monday, we remain neutral on the aussie at these levels with the May opening range likely to offer further conviction on a directional bias. Note that a breach above 1.0475 exposes resistance targets at the February lows just shy of the 1.06-figure, backed closely by the 23.6% retracement at 1.0620 with daily support holding at 1.0360. – MB