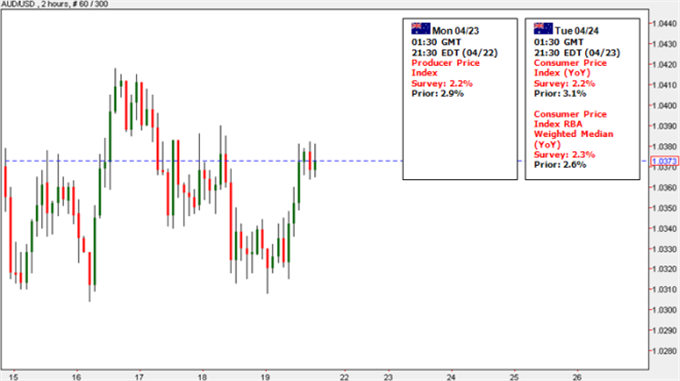 The Australian dollar is modestly firmer at the close of trade this week with a meager gain of just 0.07 percent. While data out of Australia was rather sparse this week, minutes from the RBA policy meeting re-affirmed expectations that the central bank will look to further ease monetary policy, specifically if the “inflation outlook moderates.” With key inflation data and the FOMC policy meeting on tap next week, the pair remains at risk with the exchange rate looking to test channel resistance dating back to March 6th.

Looking ahead, investors will be closely eying inflation data early in the week with the pace of price growth expected to ease to 2.2% y/y from a previous read of 3.1% y/y. With the RBA having already explicitly stated that members see room for further easing if the inflation outlook moderates, expectations for an interest rate cut will be solidified with Credit Suisse overnight swaps already factoring in a 95% chance of a 25basis point cut at the next meeting with twelve month expectations calling for an additional 94 basis points in cuts. It’s important to note however that a rate cut may be largely priced in at this point and the downside pressure from the print may be tempered. If core CPI comes in stronger than expected however, the RBA may be reluctant to move on rates as inflationary concerns begin to take root with such a scenario likely to be bullish for the aussie.

The FOMC interest rate decision on Wednesday steals the spotlight with Bernanke taking the stage for the quarterly press conference and interest rate forecasts. We maintain that with the core rate of inflation continuing to top expectations, the stickiness in prices are likely to limit the Fed’s scope for further easing. The individual interest rate projections form the committee will be of extreme significance and if we see member beginning to pare back their expectations to anchor rates through late 2014 look for the dollar to remain well supported with risk sentiment likely to remain on the defensive as investors begin to contemplate life without the crutch of central bank easing.

From a technical standpoint, the aussie has continued to trade within the confines of a descending channel formation dating back to the March 6th with the exchange rate closing just above the 200-day moving average at 1.0370. A breach above this level eyes critical resistance at the April high at 1.0465 and the February low at 1.0570. Interim support rests with the weekly low at the 1.030-handle backed by the 61.8% Fibonacci retracement taken from the December advance at 1.0240. While we continue to favor the downside for the AUDUSD, we remain on the sidelines pending a break below the weekly low or a more broad-based risk sell-off. For complete aussie scalp targets refer to this week’s Scalp Report. - MB