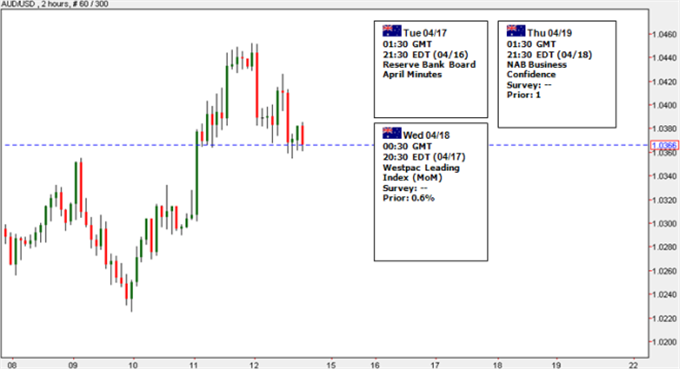 The Australian Dollar had a modestly strong week, climbing higher against all of the majors save the Japanese Yen, the top performer, to which it depreciated by 0.31 percent against since last Friday. Overall, the progress made by the Australian Dollar, against the US Dollar in particular, will need some serious help should the highest yielding major currency continue to see further gains. We are very doubtful of this happening fundamentally speaking in the near-term (and the technicals are discouraging as well). Before we delve into the only event on the Australian economic docket that could be considered a “game changer” – the minutes from the recent Reserve Bank of Australia meeting – we should take note of what fundamentals said policymakers are looking at.

To start, there is a counterargument to our bearish fundamental bias: “The Australian economy added 44.0K jobs in March versus the 6.5K consensus, while the unemployment rate dropped to 5.2 percent; the economy is bottoming and already starting to improve.” While this may hold true, the Reserve Bank of Australia’s primary concern has not been the labor market; it’s been the housing and mining sectors. In regards to the former, house prices dropped 11 out of 12 months in 2011, and little progress has been made this year with respect to preventing the housing bubble from popping (think US housing market mid- or late-2007). In regards to the latter, Chinese growth data this week was abysmal. Why does the Chinese economy and thus Chinese policy matter to the Australian Dollar?

Why does Chinese policy matter? In terms of the FX markets, the Chinese growth pictures not only lends to broader risk-sentiment trends but to the macro-fundamentals influencing the Australian economy as well. China is Australia’s largest trading partner accounting for just over 13 percent of trade, by most metrics. This underscores the reality that Chinese demand for metals – Australia’s largest output sector – provides substantial support for the Australian economy. If price pressures are rising in China as growth slows (this is seemingly occurring), PBoC officials won’t be able to loosen monetary policy; this in turn could hurt Chinese demand for foreign goods (like Australia’s commodities).

All of this is important to keep in mind when considering the release of the RBA’s minutes this week. At the policy meeting, rates were left on hold at 4.25 percent. However, following the meeting, the Credit Suisse Overnight Index swaps plunged lower to suggest an 87.0 percent chance of a rate cut at the May meeting; after this week’s employment print and Chinese data, there is an implied 85.0 percent chance of a rate cut in May. After the minutes were released, the Aussie slid, in particular against the Japanese Yen and the US Dollar. Considering that the minutes should detail the policy meeting that prompted a bearish response by the AUDUSD and AUDJPY, we expect the same on Tuesday following the minutes. When also considering the data released this week and a very evident slowdown in global growth alongside the reemergence of Euro-zone debt issues, the coming five days could be tragic for the Australian Dollar. – CV