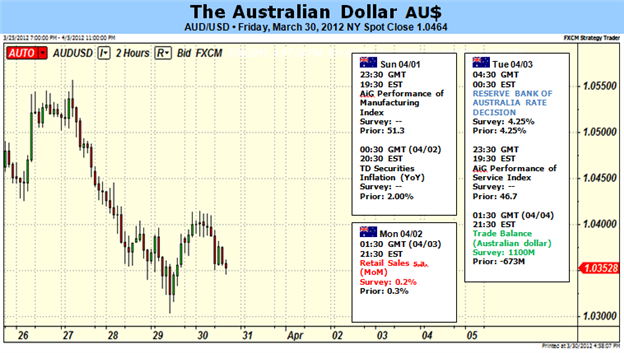 The Australian Dollar was the worst performing major currency this week, losing 1.10 percent to the U.S. Dollar and 1.95 percent to the best performer, the British Pound. March was not a kind month to the Australian Dollar, in which it depreciated by 1.52 percent against the Japanese Yen, 3.66 percent against the U.S. Dollar, and 4.22 percent against the British Pound. The Aussie’s weakness across the board – it was the worst performing major in March – comes on the heels of a string of poor Chinese data and a more dovish Reserve Bank of Australia. Both factors will be influential this week, with more attention paid to the latter.

Before we delve into the RBA’s policy meeting on Tuesday, there are a number of other events that are worth paying attention to. Building approvals for February are expected to show some growth relative to recent trends, but a continued deterioration overall. The housing market is a paramount concern for policy makers, for good reason: housing prices fell for most of 2011, but for the end of the year. Elsewhere, both retail sales and trade balance figures for February are forecasted to show an improvement (emphasis on the latter).

However, while these events are important, they pale in comparison to the RBA rate decision on Tuesday. According to a Bloomberg News survey, the RBA is expected to keep rates on hold at 4.25 percent, after cutting rates in both November and December. Yields are telling us a different story. The Australian 10-year government bond settled at 4.076 percent on Friday; when rates, even on the longer-end of the yield curve start to move below the central bank’s cash target rate, it is often a sign that market participants are pricing in a more dovish policy. Credit Suisse Overnight Index Swaps are pricing in a 44.0 percent chance of a 25-basis point rate cut on Tuesday, up from 27.0 percent at the beginning of the week at 15.0 percent at the beginning of the month.

The Aussie has tracked these rise in rate cut expectations given the currency’s performance this past week. To me, it seems that markets are pricing in a rate cut. If the RBA holds back, a scenario that is seemingly less likely, the Aussie could find support across the board for a few sessions as some of the negative sentiment surrounding the high yielding currency is unwound. I believe that there is greater upside potential than downside potential in the Aussie surrounding this rate decision, as such. It is also worth noting that given the negative sentiment surrounding the Chinese economy, the People’s Bank of China could surprise markets with a rate cut of their own in the near-future in order to quell fears of a hard landing. –CV