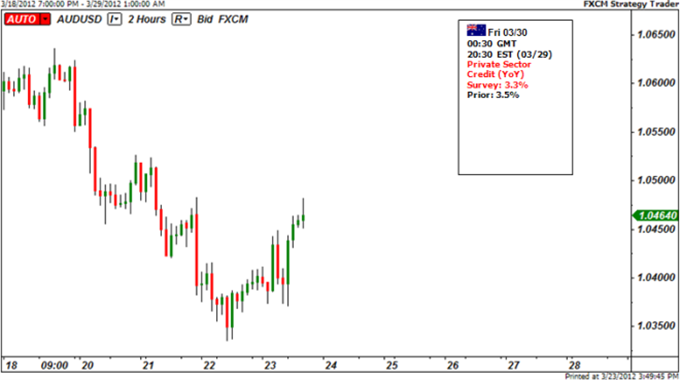 The Australian dollar is the worst performer against the greenback this week with the pair of by more than 1.1% at the close of trade on Friday. Concerns over slowing growth in China early in the week were fueled by weaker-than-expected manufacturing PMI data which showed contraction in the sector for the month of March. As Australia’s largest trade partner, easing in Chinese demand has substantial implications for the domestic economy and the aussie is likely to remain under pressure as growth prospects are threatened.

Interest rate expectations from the Reserve Bank of Australia have continued to deteriorate with Credit Suisse overnight index swaps now factoring in a 27% chance of a 25basis point cut at the next policy meeting with twelve month expectations calling for another 56 basis points in interest rate cuts from the central bank. As concerns over a slowdown in China continue to take root, we may see Governor Glenn Stevens show an increased willingness to further ease policy as sluggish economic activity dampens the outlook for inflation.

Looking ahead to next week, traders will be eyeing data out of Australia with February HIA new homes sales and private sector credit on tap. With the real estate sector still continuing to drag on the economy, investors will be closely watching new home sales after last month’s print posted a dismal 7.3% decline m/m. Private sector credit is expected to rise by 3.3% y/y, up from a previous read of 3.5% y/y with the month on month figure also rise to 0.3% from 0.2% m/m. Should the data come in weaker than expected, look for the aussie to come under increased pressure as tighter lending and continued weakness in the housing sector continue to weigh on demand for the high yielder. However in the absence of any significant economic data, look for the AUDUSD to continue to follow broader market sentiment with a rally in risk assets likely to keep the pair well supported in the interim.

From a technical standpoint, the AUDUSD has continued to trade within the confines of a descending channel formation dating back to the February highs with daily support seen at the 50% Fibonacci retracement taken from the December 15th advance at 1.0360. Topside resistance is eyed at the 38.2% retracement at 1.0475 with a breach above this level eyeing channel resistance, currently around 1.0550. The aussie rebounded off the 100-day moving average on Friday at 1.0370 with exchange rate likely to continue to climb early next week before reversing course, with a break close below the 50% retracement at 1.0360 eyeing daily targets at the 61.8% retracement at 1.0240. - MB