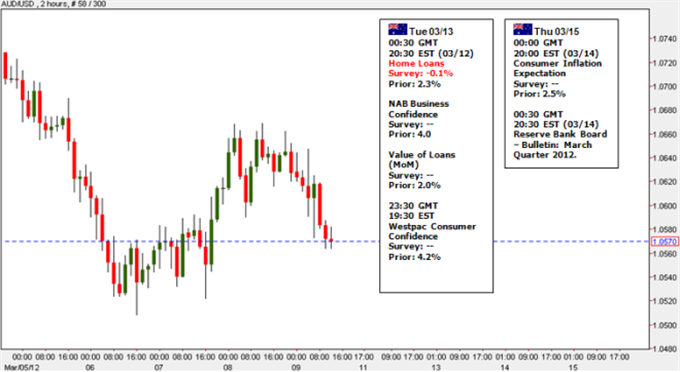 The Australia dollar came under pressure as the Reserve Bank of Australia held a dovish tone for monetary policy, and the high-yielding currency may face additional headwinds in the following week as the fundamental outlook for the $1T economy deteriorates. Although the RBA held the cash rate at 4.25%, Governor Glenn Stevens kept the door open to lower the benchmark interest rate further, and we may see the AUDUSD continue to give back the advance from earlier this year as interest rate expectations falter.

According to Credit Suisse overnight index swaps, market participants now see at least 50bp worth of rate cuts over the next 12-months, and investors may increase their call for lower borrowing costs as the slowdown in economic activity dampens the outlook for inflation. Indeed, the weaker-than-expected 4Q GDP report strengthens the case for additional monetary support, and we may see the RBA ease policy further during the first-half of the year as the central bank aims to encourage a sustainable recovery. With China – Australia’s largest trading partner – cutting its 2012 growth forecast to an annualized rate of 7.5%, weakening trade conditions may prompt Governor Stevens to scale back the fundamental assessment for the region, and we may see the central bank show a greater willingness to lower the cash rate further in an effort to shield the economy. Nevertheless, as the economic docket for the following week is expected to highlight the ongoing weakness in the private sector, a slew of dismal developments could fuel the reversal in the AUDUSD, and we may see the exchange rate track lower throughout the remainder of the month as it struggles to maintain the range carried over from the previous month.

As the AUDUSD finally slips below 1.0600, the downward trend in the relative strength index reinforces our bearish call for the aussie-dollar, and we should see the pair continue to give back the rally from earlier this year as it carves out a lower top in March. In turn, the AUDUSD may come up against the 200-Day SMA (1.0411) to test for near-term support, but a break below the moving average would expose the 23.6% Fibonacci retracement from the 2010 low to the 2011 high around 1.0350-60. - DS