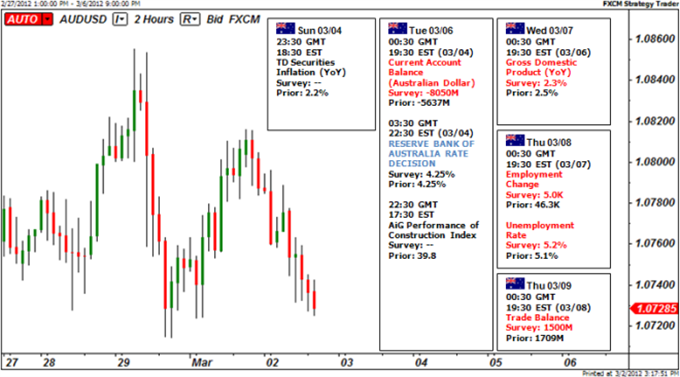 A week of heavy event risk has established a broadly negative environment for risk appetite, threatening to undermine the sentiment-sensitive Australian Dollar by extension. The first scene-setting development was marked by the second 3-year ECB LTRO operation, where the central bank allocated just over €529 billion to EU financial institutions. This brought the total cash war-chest available to lenders to offset the damage from a possible default of a Eurozone member state to about €1 trillion, enough to prevent a blow-up in Greece, Portugal and Spain from turning into a wider credit squeeze. Next, Federal Reserve Chairman Ben Bernanke tellingly said that the improvement in US labor-market conditions has been “more rapid” than anticipated while conspicuously omitting any mention of further stimulus, which makers took to mean a QE3 program would probably not materialize.

Neither of these developments can be called overtly negative for sentiment. On the contrary, a downgrade in the threat posed by the Eurozone debt crisis to the broader markets is decidedly good news. As for the Fed, while the markets were disappointed with the likely dismissal of further easing, investors’ spirits were quick to recover. This makes sense: opting out of additional stimulus is not necessarily bad news if the economy is able to continue to recover on its own, which recent data flow suggests is increasingly likely to be the case. Rather, what these outcomes produced was broad-based resolution to the major sources of uncertainty in the global economic outlook, cementing in place a generally defined outlook for global growth in 2012. With the Armageddon-level scenario in Europe dismissed at least for now and the US recovery left to its own devices, the markets can generally return to monitoring familiar fundamental news-flow to get their bearings. It is this that sets the stage for the return of downward pressure on risky assets as the spotlight turns to the consensus outlook for GDP growth, which continues to call for a slowdown at the global level this year. With the Australian Dollar still heavily correlated with the S&P 500 – the benchmark gauge for sentiment trends – the high-yielding currency can be expected to follow shares lower in such an environment.

On the domestic fundamental calendar, the RBA interest rate decision is in focus but fireworks following the outcome appear unlikely. Central bank chief Glenn Stevens made it abundantly clear over recent weeks that monetary policy is in neutral for the time being, arguing that absent unforeseen developments growth and inflation are expected to fall close to long-term trend levels over the medium term. At the very least, similar rhetoric is likely to hold up for a several months from here as the RBA evaluates developing trends in leading economic data. The markets appear in agreement, with data compiled by Credit Suisse suggesting traders are pricing in a mere 15 percent chance of a rate cut this time around. Big-ticket data releases are also expected to print in relatively neutral territory. The annual GDP growth rate is expected to register at 2.3 percent in the fourth quarter, a hair slower than the 2.5 percent in the three months through September 2011 but not worryingly below the long-run average of 3 percent. Likewise, February’s job report is forecast to see the jobless rate tick narrowly higher to 5.3 percent, putting it squarely at the 10-year average and comfortably below the longer-term mean north of 7 percent. – IS