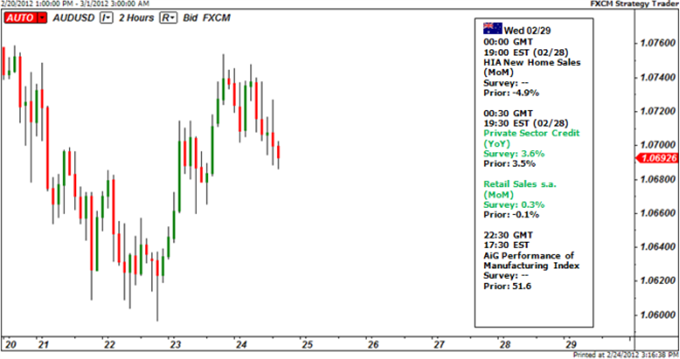 The Australian dollar ended the week relatively unchanged after paring the advance to 1.0815, but the high-yielding currency may trend higher going in to March as we’re expecting to see a slew of positive developments coming out of the $1T economy. Indeed, the economic docket is expected to show a rebound in retail sales paired with another rise in private sector credit, and the data could spur a run at 1.10 as the Reserve Bank of Australia talks down the risks surrounding the region.

Indeed, RBA Governor Glenn Stevens talked down speculation for lower borrowing costs, stating that the benchmark interest rate is ‘about right for the moment,’ and went onto say that the recent appreciation in the local currency is ‘happening at a time when the terms of trade have actually peaked and started to come down’ while testifying in front of the House of Representatives Standing Committee on Economics. Although Mr. Stevens talked down speculation for a currency intervention, the central bank head did not exclude the measure as ongoing strength in the local currency dampens the prospects for an export-led recovery, and the RBA may have little choice but to expand monetary policy further in 2012 as the slowing recovery dampens the outlook for inflation. However, Fitch Ratings cut its long-term default rating for three major banks in Australia amid the regions reliance on international financing, and the ongoing turmoil in the global financial system could pose an increased threat to the $1T economy as the region faces a protracted recovery.

Nevertheless, as the less dovish tone held by RBA Governor Stevens props up interest rate expectations, a slew of positive developments should push the AUDUSD higher over the following week, but the bearish divergence in the relative strength index may spur a sharp pullback in the exchange rate as the pair struggles to hold above the 10-Day (1.0701) and the 20-Day (1.0708) moving averages. In turn, a break below 1.0600 would expose the 23.6% Fibonacci retracement from the 2010 low to the 2011 high around 1.0350-60, and we may see the high-yielding currency face additional headwinds in March as the slowdown in global trade casts a weakening outlook for the region - DS