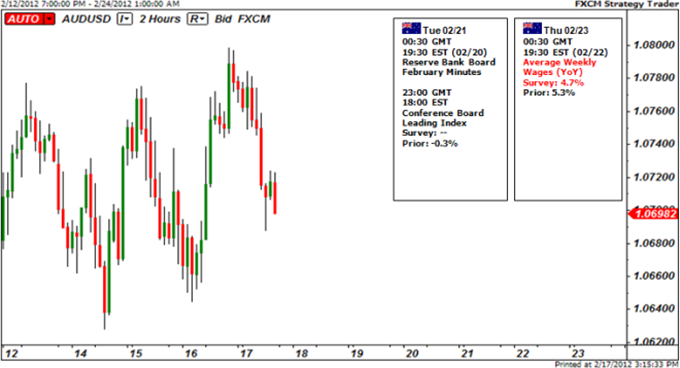 The Australian dollar pared the decline from earlier this month amid the slew of positive developments coming out of the $1T economy, but the high-yielding currency may struggle to hold its ground next week should the Reserve Bank of Australia’s meeting minutes fuel speculation for more rate cuts. Although the RBA surprised the market by keeping the benchmark interest rate at 4.25%, the central bank may continue to strike a dovish tone for monetary policy as the board curbs its outlook for growth and inflation.

Indeed, Deputy Governor Philip Lowe held a cautious tone for the region, noting that ‘businesses are scaling back their operations in Australia and some are closing down,’ while Assistant Governor Guy Debelle warned that ‘uncertainty is likely to persist for some time to come’ in light of the ongoing turmoil within the world financial system. As commercial banks in Australia remain reluctant to pass on slew of rate cuts from the previous year, the RBA may see scope to ease monetary policy further, and Governor Glenn Stevens may sound increasingly dovish next week as he’s scheduled to testify before the House of Representatives Standing Committee on Economics on Thursday at 22:30 GMT. Nevertheless, market participants appear to be scaling back bets for lower borrowing costs as Credit Suisse overnight index swaps now reflect expectations for 50bp worth of rate cuts over the next 12-months, but we may see interest rate expectations deteriorate next week should the RBA see scope to cut borrowing costs further in 2012.

The failed test of 1.0800 casts a bearish outlook for the AUD/USD and we may see the exchange rate continue to carve out a top next week as it threatens the upward trending channel carried over from the previous year. In turn, we will keep a close eye on the 20-Day SMA (1.0681) as it holds up as support, but a close below the moving average should lead to a short-term reversal as the relative strength index continues to come off of overbought territory. – DS