Aussie Heads Down Under as Chinese Data, Risk Trends Break Down 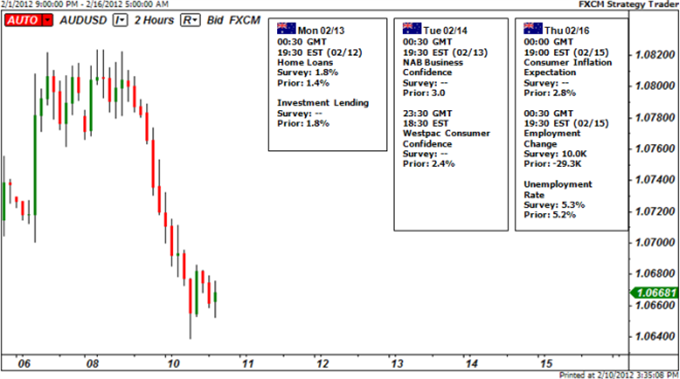 After weeks of strong performance, the Australian Dollar had its first down week in 2012, falling by 0.9 percent against the U.S. Dollar. Overall, it was not the worst performer despite its horrid performance on Friday, when it depreciated by 1.1 percent; that title goes to the Japanese Yen. Weak Chinese data – specifically, higher than expected inflationary pressures; soft loan figures (contracting money supply); and severely disappointing import data – has now handicapped the People’s Bank of China, raising concerns once again that a “hard landing” may be in the early stages of occurring. Considering China is one of Australia’s largest two-way trading partners, it comes as no surprise that the Australian Dollar was hit hard at the end of the week.

In terms of Australia-specific data that will influence the Aussie in the coming days, the docket is jam packed with event risk, with the majority of it coming at the beginning of the week. The recent round of Reserve Bank of Australia rate cuts (the key interest rate has been shaved to 4.25 percent from 4.75 percent in November) appears to be offering support for the housing sector, with home loans data for December forecasted to increase by 1.8 percent. This slight bump on a monthly-basis (up from 1.4 percent in November) is a welcomed development for housing, which has experienced price contractions in every month in 2011 but for November, as per the most up to date data available.

Beyond two separate business confidence readings due on Tuesday and Wednesday, the most important release of the week comes on Thursday, when the January labor market reading is due. Once again, the consensus forecast for the Australian labor market shows that jobs increased by 10.0K, after 29.3K were lost in December. It is worth nothing that the consensus forecast hasn’t been close in recent months, and that another reading off the radar – exceptionally bullish or bearish – is quite possible. This event offers the greatest potential for volatility, as it is also the event with the greatest amount of uncertainty surrounding it. – CV