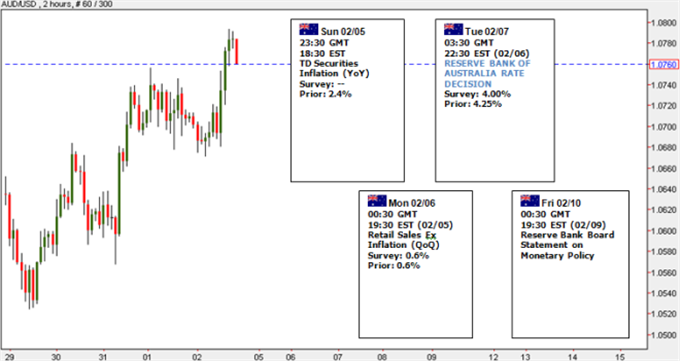 Although the Australian dollar had a great run coming into February, we expect the high-yielding currency to come under pressure next week as the Reserve Bank of Australia is expected to lower the benchmark interest rate from 4.25%. According to Credit Suisse overnight index swaps, investors are pricing a 79% chance for a 25bp rate cut, while market participants see borrowing costs falling by nearly 100bp over the next 12-months as the central bank tries to shield the $1T economy.

At the same time, 24 of the 27 economists polled by Bloomberg News expect to see the RBA lower the cash rate to 4.00%, but we may see central bank Governor Glenn Stevens talk up speculation for lower borrowing costs as the slowing recovery dampens the outlook for inflation. As the slowdown in global trade paired with the ongoing turmoil in the euro-area dampens the prospects for a more robust recovery, we expect the central bank to maintain a dovish tone for monetary policy, and Mr. Stevens may continue to strike a cautious outlook for the region as the central bank anticipates to see slow growth in China – Australian’s largest trading partner. In contrast, Australian Treasurer Wayne Swan argued that there is too much focus on the downside risks for the economy as he expects to region to withstand ‘the worst the world can throw at us.’ In turn, the encourage comments by Mr. Swan may lead the RBA to soften its dovish tone for monetary policy, but the central bank may show an greater willingness to cut borrowing costs further in order to stem the downside risks for the region.

As the AUD/USD fails to push above 1.0800, the pair appears to have carved out a triple-top in February, and the technical outlook foreshadows a sharp selloff in the exchange rate as the high-yielding currency remains overbought. However, we will be closely watching the 10-Day SMA (1.0628) as it holds up as short-term support, but a break and a close below the moving average should expose former resistance around the 23.6% Fib from the 2010 low to the 2011 high (1.0350-60), which could act as new support. – DS