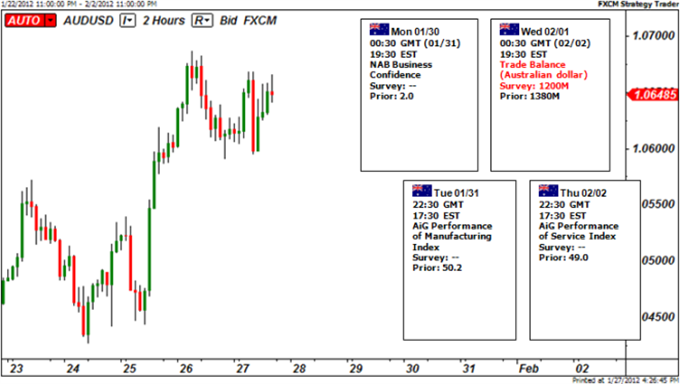 The Australian Dollar posted another strong week against the U.S. Dollar, gaining 1.60 percent the past five days. Quizzically, despite the Australian Dollar being the highest yielding major currency that we track at DailyFX, it was not the best performer this week; that title goes to the Swiss Franc. This is a clear indication that there are other fundamental factors weighing on the Australian Dollar, and that in a risk-off environment – one that may materialize in the coming days given the technical overreach of equity markets – the Aussie is due for a major correction.

A tenet of technical analysis is that a move by an asset (commodities, currencies, equities, etc) is considered to be ‘technically strong’ if there is strong volume supporting the move. Such has not been the case, with volume on the S&P 500 barely holding near its 20-DMA for much of January (it is even lower if you remove the last week of December from the equation). With the S&P 500 now up 4.68 percent for the year, I would not call the move higher constructive. And, with a statistically significant +0.889 correlation with the S&P 500, the AUD/USD’s move has not been constructive either, in my opinion.

Moving on to event risk next week, there is not much significant data on the docket that could propel the AUD/USD through the 1.0700 figure. Two pieces of data pique my interest. On Wednesday, building approvals from December are due, and the forecasts are not pretty. Approvals are expected to have contracted by 22.1 percent on a year-over-year basis. Fitting this in with the bigger picture, Australian house prices declined ten out of eleven months in 2011, with November being the exception. Similarly, house prices dropped at least 0.5 percent or more on five different occasions last year. This is a major concern and we will continue to monitor how the Reserve Bank of Australia responds to this; I expect at least one more rate cut this year, though two are not out of the question if global demand for base metals (aluminum, iron ore) slow dramatically.

Also due on Wednesday is trade balance data from December. Like the preceding disappointing housing data, the trade balance figure is not supportive of a stronger Aussie either. The headline figure is expected to have contracted to 1200M from 1380M, a continuation of the decline in Australia’s trade balance that started in August. If this is the case, which is most likely is, it is a clear indication that Australia’s trade with emerging markets, in particular China, is slowing as well. Another weak figure could give credence to the RBA’s desire to cut rates further, as market participants are pricing 92.0-basis points out of the Australian Dollar over the next 12-months. –CV