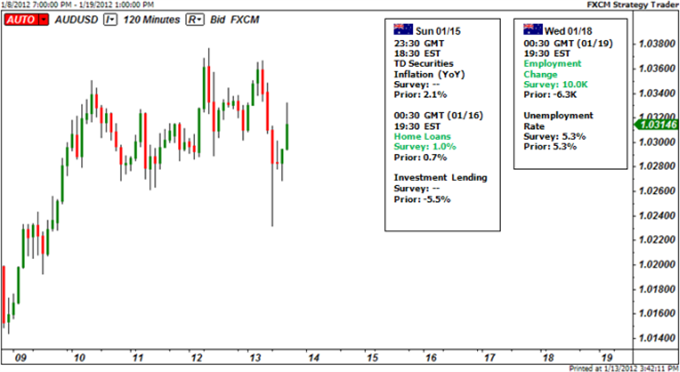 The Australian Dollar was the second best performing major against the U.S. Dollar – only the New Zealand Dollar was stronger – gaining 0.92 percent over the past week. Although the Aussie had pared some of its gains versus the U.S. Dollar by Friday, due to the Euro-zone downgrades by Standard and Poor’s, it’s performance over the past several days was resilient. Australian data was mixed this week, which makes the Aussie’s performance that much more impressive.

If global risk trends allow, the set of fundamental data due in the week ahead could provide some support for the case for another constructive week for the Australian Dollar. The two key pieces of data this week both should offer a rosier picture of the Australian economy. First, home loans are expected to have increased in November. Recently, the Australian housing sector has been showing signs of deterioration, not dissimilar from the condition the American housing market was in 2007. Overall, it appears that the Australian sector could be headed to a dreary state if the long-term trend holds; this release could alleviate some concerns in the short-term.

On Wednesday, labor market data is forecasted to show that the economy added 10.0K jobs in December, but there is a chance that the data is a miss. Recent forecasts have not proved too accurate, so any bullish expectations of the release are cautioned ahead of the print. With the unemployment forecasted to hold at 5.3 percent, Thursday’s round of data could round out a strong week, fundamentally, for the Aussie.

As noted earlier, these analyses are contingent on global risk trends, which have improved in the New Year. In fact, the commodity currency block is the strongest group of currencies against the U.S. Dollar year to date (it is worth noting that the European currencies have underperformed their counterparts on the whole). With the Standard and Poor’s downgrades behind us, attention could shift away from Europe and into Asia, where China has recently showed some signs of slowing growth amid contracting credit conditions.

Chinese growth figures for the fourth quarter are due on Wednesday, and they pose the biggest event risk on the docket to a strong week for the Australian Dollar. Real GDP, on a year over year basis, is expected to have slowed to 8.7 percent from 9.2 percent in the prior period. IF Chinese growth is slowing, it does not bode well for Australia, whose major trading partner is China. As a proxy for Chinese growth, base metals such as aluminum and copper have underperformed recently, an ominous sign for the Australian whose most crucial sector is mining. It’s my belief that a threat of a Chinese slowdown outweighs positive domestic data, tending to a neutral forecast in the days ahead. –CV