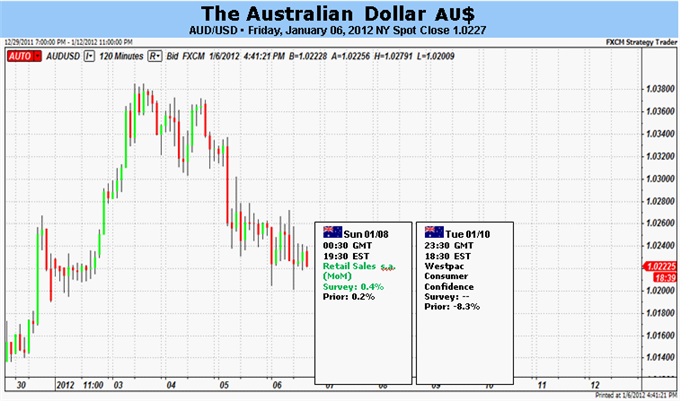 The Australian dollar was the one of the top performers against the greenback this week after the kiwi, with an advance of just 0.17%. The first few sessions of 2012 suggested that markets were primed to begin the year on proper footing as the dollar came under significant pressure and risk assets along with the aussie surged. However by week end, it became clear that European concerns- not just in the Euro-zone but in Switzerland and the United Kingdom- would weigh heavily on market sentiment for some time to come. With the aussie pulling back sharply off its highs against the dollar, the world’s reserve currency has shown early signs of decoupling from the inverse relationship with risk as seen today when a stronger-than-expected non-farm payroll report fueled a broad based rally in the greenback. We look for this relationship to continue to break down later this year as positive US data continues to beat consensus estimates.

The Australian economic docket is extremely light next week with only retail sales and building approvals on tap. Consensus estimates call for sales to improve by 0.4% m/m for the month of November, up from a previous print of just 0.2% m/m. Building approvals are also expected to show some signs of improvement with a read of 6.0% m/m, up from a dismal 10.7% contraction in October. Still, the year on year print is expected to come in at -19.8%, up from a previous print of -29.8% y/y. With little in the way of major event risk from the Australian calendar, the aussie will continue to take cues off broader market sentiment with German, Greek, Spain, and Italian bond auctions joining the European Central Bank rate decision to take center stage as the ongoing debt saga in Europe unfolds.

Data out of China could also impact the high yielder next week with the December trade balance, CPI, and PPI figures on tap. Both exports and imports are expected to soften with consensus estimates calling for a trade balance print of $8.80B, down from $14.53B a month earlier. Consumer prices will be closely eyed by traders with estimates calling for a print of 4.0% y/y, down from 4.2% in November, while producer prices are widely expected to ease to 1.6% y/y from 2.7% y/y. As Australia’s largest trade partner, a slowdown in China would weigh heavily on Australian exports putting the aussie at further risk. More telling data out of China will be released the following week when 4Q real GDP figures and industrial production data are expected to show further slowing in the world’s second largest economy.

The AUD/USD closed the week well below the 23.6% Fibonacci extension taken from the August 1st and October 27th crests at 1.0365. Interim resistance stands at the 1.03-figure backed by the 1.0365 with the 200-day moving average holding just higher at 1.0413. The medium-term bias for the pair remains weighted to the downside with support targets held at the 100-day moving average just below the 1.02-handle. Subsequent floors are seen at the 38.2% extension at 1.0120 and parity. For intra-day market levels refer to this week’s AUD/USD scalp report.