Aussie will Remain Volatile with RBA Rate Decision on Tuesday 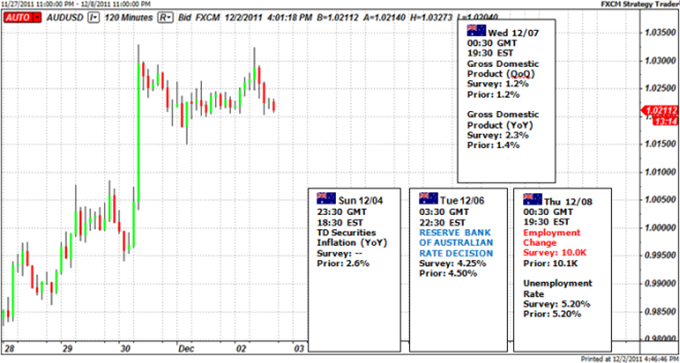 After four consecutive weeks of losses, the Australian Dollar finally posted a rebound against the U.S. Dollar. Upon gapping open at Sunday, the Aussie found additional support through the early part of the week ultimately culminating with a massive run up on Wednesday following coordinated central bank intervention. This was the primary driver of Aussie strength. Overall, the AUD/USD finished the week 5.2 percent higher, though off of its 6.35 percent peak.

Looking ahead to next week, there are some key events on the docket for Australia that will certainly encourage volatile price action, indifferent of the rapidly deteriorating macroeconomic picture engulfing financial markets. The first such event comes Tuesday, when the Reserve Bank of Australia will meet for its monthly policy meeting. At its last meeting, the RBA cut its key interest rate by 25-basis points to 4.50 percent, and another 25-bps cut is forecasted for December’s decision. According to Credit Suisse’s Overnight Index Swaps, markets are pricing in a 97.0 percent chance of this cut actually occurring. However, given the commentary in the RBA’s Board Minutes from the November meeting, it appears that policymakers believed that the rate cut might not have been necessary; instead, it was preemptive. As such, should the RBA hold rates, the Aussie looks primed to move to the upside quickly.

The second key event we’re watching is the gross domestic product print for the third quarter. Growth in Australia is forecasted to have picked up from July through September, with a Bloomberg News survey showing a 2.3 percent forecast year-over-year. Growth prospects for the Australian economy appear to be dimming, as evidenced by a slowdown in emerging markets but more importantly, China. The People’s Bank of China lowered its reserve requirement ratio for the first time in three years this past week, a sign that growth and lending may be waning. Given the ties between the Australian economy and China, if Chinese growth has stalled, it is likely that the forecast provided may be too optimistic.

Finally, it is worth mentioning the Euro-zone summit. At the end of next week, European leaders will meet – again – to try and find ways to institute structural reforms that will encourage long-term growth prospects while simultaneously reassuring market participants that the Euro-zone will continue to exist. Considering the Aussie’s place as a speculative currency due to its highest yield among the majors, the coming week looks to be exceptionally choppy.

Should the RBA cut rates, GDP comes in worse-than-forecasted, and the Euro-zone summit yields little-to-nothing, the Aussie looks to weaken the most among the majors; if the RBA holds rates, GDP meets or beats expectations, and the Euro-zone summit produces a plan for fiscal union and/or a mandate to allow the European Central Bank to wield unlimited power in the bond markets, the Aussie stands to be among the best performers in the near-term. –CV