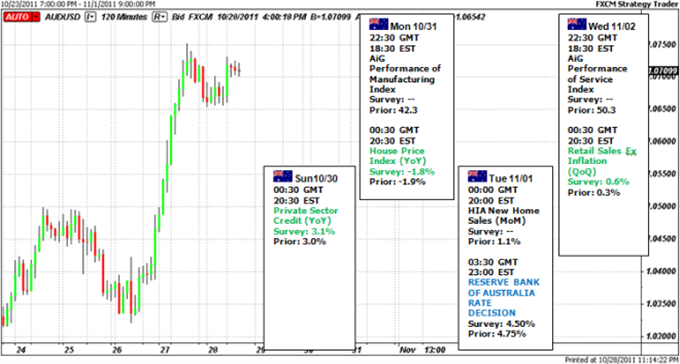 The Australian Dollar was the best performing major currency on the week against the U.S. Dollar, posting a 3.12 percent amid the flurry of buying across all asset classes. Although the Aussie fell back from its highest level against the U.S. Dollar in two-months, set on Thursday at 1.0752, the lack of conviction behind the pullback suggests that there is still some further potential to the upside as November begins. Still, with the Euro-zone debt crisis merely on pause coupled with softer-than-expected inflation numbers from the third quarter, interest rate expectations in the medium-term have started to weaken.

In the early part of the week the AiG performance of manufacturing index will be released, which has shown that Australian production has been contracting. The index has no forecast figure, but the recent trend has been increasingly negative since the index’s peak in June at 52.9, the last time manufacturing activity grew in 2011. The 42.3 reading in September signals a deeper contraction, as a reading below 50.0 signals receding manufacturing activity.

The most important event of the week comes on Tuesday, when the Reserve Bank of Australia will hold its November policy meeting. In spite of the recent rally the Aussie has experienced since October 4, a teetering Australian economy suggests lower rates are on the horizon. According to the Credit Suisse Overnight Index Swaps, there is an 85.0 percent chance of a 25-basis point rate cut at the central bank meeting on Tuesday. Accordingly, 102-basis points are being priced out over the next 12-months, indicating a cut in the rate is coming down the pipe.

A rate cut is a likely scenario, if not at this meeting, at one of the upcoming ones. As per the RBA’s October meeting minutes, the central bank believes that “it was likely that growth over the forecast period would be somewhat slower and that the labor market would be less tight than forecast.” On the same note, they said that “this prospect, as well as the lower starting point for inflation, meant that the inflation outlook appeared less concerning than was the case a few months ago.” Given these observations, it appears that the Reserve Bank of Australia is becoming increasingly dovish. While concerns over the Australian economy are limited in scope, any pullback in Australian growth is likely to be provoked by broader global macroeconomic trends. This has translated into a weaker Australian Dollar over the third quarter of 2011 (at Friday’s close, it was still over 2 percent below its all-time high set in July), as interest rate expectations have deteriorated sharply in recent weeks, a trend that is expected to continue. –CV