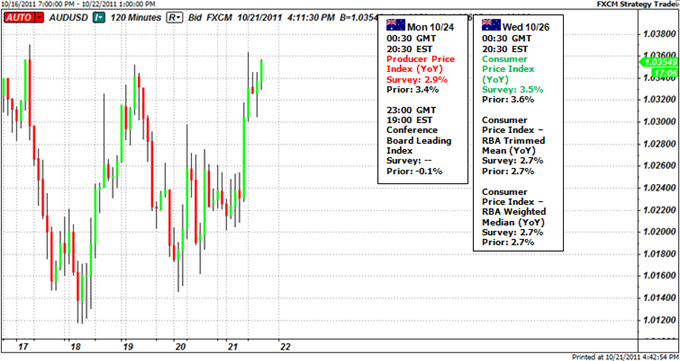 The Australian dollar was fractionally higher against the greenback this week with an advance of 0.07% at the close of trade in New York. Higher yielding currencies saw a surge in volatility this week as speculation for a concrete rescue plan for distressed periphery nations in the Euro-region saw markets stage a substantial rally, with the aussie paring losses sustained earlier in the week. However with such strong optimism that officials will come to a consensus at the EU summit this weekend, risk to the aussie remains to the downside.

The Australian economic docket next week is highlighted by the third quarter PPI and CPI figures. Producer prices are expected to ease in the second half of 2011 with consensus estimates calling for a print of 2.9% y/y, down from a previous read of 3.4% y/y. Likewise, the pace of growth in consumer prices are also expected to soften with a print of 3.5% y/y from 3.6% y/y. Should inflation concerns be kept at bay, interest rate expectations for the Reserve Bank of Australia may deteriorate even further with Credit Suisse overnight swaps now factoring in a 78% chance for a 25 basis point cut next month with twelve month expectations factoring 107 basis points in rate cuts. That figure is down from nearly 160 basis points in early October and may continue to come off as domestic conditions improve.

The last RBA minutes suggested that the central bank continues to see increased risk from global growth concerns with Governor Glenn Stevens citing that, “conditions in global financial markets have continued to be very unsettled, with uncertainty increasing about both the prospects for resolution of the sovereign dent and banking problems in Europe, and the outlook for global economic growth.” And although the governor noted that economic activity in China and Asia continue to expand recent data has suggested that Chinese growth may be waning with concerns over a possible credit crunch beginning to take root. Accordingly the aussie may come under pressure with the high yielder now largely at the mercy of broader market sentiment.

The aussie may be poised for further gains after the aussie broke above trendline resistance dating back to August 1st on Friday. Multiple attempts at a topside break were met with little success until news later in the week that European officials planned on releasing details for a comprehensive rescue plan for the debt laden region saw the pair close the week just shy of the Monday high at 1.0370. Topside resistance holds at the 1.0360 with subsequent ceiling seen at the 100% Fibonacci extension taken from the October 18th and 20th troughs at 1.0380, the 1.40-figure, and 1.0450. Interim support rests at former trendline resistance followed closely by the 61.8% extension at 1.0290 and 1.0200. With hopes for salvation for the euro soaring this week, higher yielding currencies and assets see increased downside risk should officials fail to satisfy market expectations for a long-term comprehensive European rescue plan. -MB