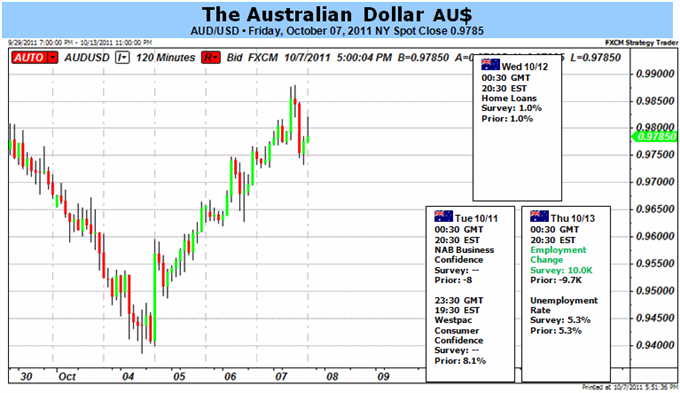 The Australian dollar struggled to hold its ground on Friday and the pullback from 0.9877 may gather pace over the following week as the Reserve Bank of Australia shows an increased willingness to scale back the benchmark interest rate from 4.75 percent. After keeping the cash rate unchanged in October, the central bank reiterated that the economic recovery is weaker than initially expected, and talked down the risk for inflation, stating that medium-term price growth is expected to be consistent with the 2 to 3 percent target range.

The slowdown in growth and inflation may encourage Governor Glenn Stevens to scale back the rate hikes from back in 2010, and speculation for lower borrowing costs certainly dampens the outlook for the high-yielding currency as market participants see lower interest rates on the horizon. According to Credit Suisse overnight index swaps, market participants still see the interest rate being cut by nearly 150bp over the next 12-months, and expectations for lower borrowing costs may gather pace over the near-term as the central bank continues to soften its hawkish tone for monetary policy. At the same time, the International Monetary Fund said the RBA ‘has ample scope’ to shore up the economy, but warned that the Australian dollar may be overvalued by 10-20 percent ‘from a medium-term perspective,’ which could further impede on the economic recovery. In turn, we may see Mr. Stevens continue to talk up speculation for lower borrowing costs, and the Australian dollar may give back the rebound from 0.9390 as interest rate expectations falter.

As the AUD/USD fails to push back above the 38.2% Fibonacci retracement from the 2010 low to the 2011 high around 0.9930-50, the pair appears to have carved out a lower high this week, and the exchange rate may trend lower over the near-term as the fundamental outlook for Australia deteriorates. Moreover, should market sentiment continue to taper off over the following week, the flight to safety is likely to sap demands for the high-yielding currency, and we may see the aussie-dollar may a run at the 61.8% Fib around 0.9200-20 as risk trends continue to heavily influence price action in the foreign exchange market. - DS