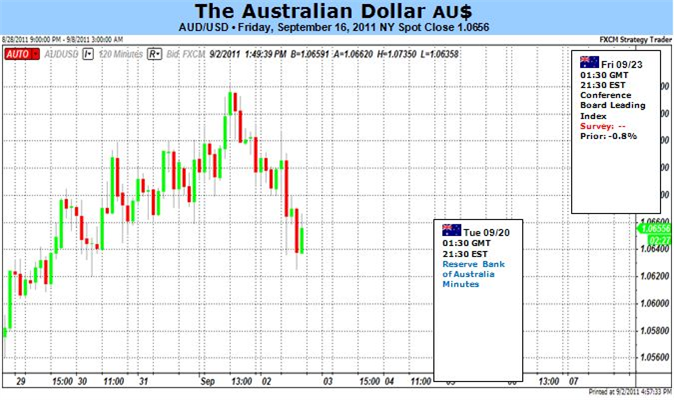 The Australian Dollar broke free of its correlations the past week, which unfortunately was not a good thing for the antipodean currency. Over the past thirty days, the Aussie has enjoyed a +0.94 correlation with the Dow Jones Industrial Average. Yet, over the past five days, as the Dow Jones Industrial Average rallied by 4.70 percent, the Aussie fell by 1.00 percent against the U.S. Dollar. This suggests one of two things: equity markets are entirely too bullish and are due for a retracement, or the Aussie has some significant room above it to appreciate. Unfortunately, fundamental data are suggesting it is going to be the former, while the technicals are pointing towards further losses as well.

Data out of the antipodean nation was mixed at best during the second full week of September. A report on Sunday showed that the trade balance deteriorated in July, though this was expected as the Aussie was moving towards all-time highs over the course of the month. On Monday, the National Australia Bank indicators of both business conditions and business confidence deteriorated, a sign that lending may be slowing in the coming months. Dwelling starts, the Australian equivalent of the United States’ housing starts, contracted by 4.7 percent in the second quarter, significantly below the forecasted 2.0 percent figure. Such a print suggests that the Australian housing sector is significantly weaker than previously though. This is something to monitor in the coming periods.

The coming week will unlikely provide any relief for the Aussie, at least on a fundamental basis. While there are only two significant pieces of data due, one of them is the minutes from the Reserve Bank of Australia meeting on September 6. At the meeting, the Board of the Reserve Bank of Australia voted to leave the cash rate unchanged at 4.75 percent. Governor Glenn Stevens noted that “conditions in global financial markets have been very unsettled over recent weeks….as a result, the outlook for the global economy is less clear than it was earlier in the year.” Governor Stevens’ statement included a note that some “temporary impediments” to growth, such as the supply-chain disruptions from the Japanese earthquake as well as higher commodity prices, were “lessening.” The statement afterwards also suggested that “employment has been moderate this year” while “CPI inflation should start to decline.”

Given these observations, it appears that the Reserve Bank of Australia is becoming increasingly dovish. While concerns over the Australian economy are limited in scope, any pullback in Australian growth is likely to be provoked by broader global macroeconomic trends. This has translated into a weaker Australian Dollar over the third quarter of 2011, as interest rate expectations have deteriorated sharply in recent weeks. This sentiment will likely be confirmed in the minutes from the meeting, and with any future rate hikes essentially off the table at this point, it will take a significant upturn in broader macroeconomic indicators to fuel the risk rally and thus boost the Aussie. Such a turn of events looks increasingly unlikely, leaving further stimulus by central banks as the last bastion of hope for Aussie-bulls in the medium-term. –CV