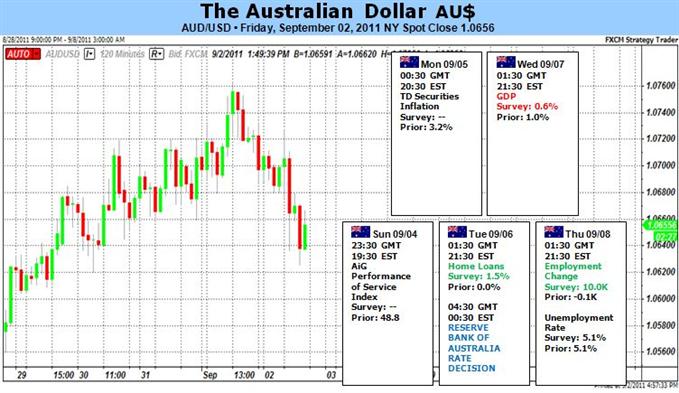 The past week was a perfect example of how the Australian Dollar is correlated with riskier assets. During the first half of the week, as equity markets rallied, the Aussie was among the strongest major currencies; the second half of the week, the Aussie fell as equity markets slid, and was one of the worst performing major currencies. Overall, the move to the upside played out, with the Aussie gaining 0.79 percent on the week against the U.S. Dollar. The only currency stronger than the Aussie over the past five days was the Swiss Franc.

Data out of the antipodean nation was mixed at best during the last week of August. A report on Sunday showed that new home sales fell by 8.0 percent in July, though that was an improvement over June’s 0.87 percent gain. On Monday, data showed that building approvals increased slightly by 1.0 percent in July, an improvement over June, but worse-than-expected. The only positive data all-around was the retail sales report for July, which showed consumption was up by 0.5 percent, better than the forecasted figure and a strong improvement over the June figure.

Based off of the last few weeks of prints, the coming week does not look bright for the Australian economy. The AiG Performance of Service index, due out on Sunday, has been steadily declining over the past several months, down from 51.5 in April. Although there is no forecast for this release, a continuation of this trend is likely. Quarterly inflation data released in July showed that consumer prices increased by 3.6 percent year-over-year; the TD Securities inflation index will likely show a jump in its reading on Monday, up from 3.2 percent.

The most important event of the week, however, is the Reserve Bank of Australia’s September policy meeting, scheduled for Tuesday.It is expected that the rate will be maintained at 4.75 percent. At the previous board meeting in August, the Reserve Bank of Australia decided to hold the rate steady at 4.75 percent, a level that has remained unchanged since November 2010. According to the Credit Suisse Overnight Index Swaps, there is a 25.0 percent chance of a 25-basis point rate hike at the central bank meeting on Tuesday. However, 113-basis points are being priced out over the next 12-months, indicating a cut in the rate is coming down the pipe.

On August 15, the Reserve Bank of Australia released the minutes from its August 2 meeting, which showed that any further tightening is on pause. “The case against tightening at this meeting was that the downside risks in demand had probably increased, as a result of the acute uncertainty in global financial markets. This in turn could…dampen the inflation outlook.” With global economic conditions deteriorating in the intermeeting period, the Reserve Bank of Australia’s sentiment will likely be similar; in fact, a more dovish tone would not be surprising. This view will likely be confirmed on Wednesday, when growth figures from the second quarter will be released, during which the Australian growth is forecasted to decline to 0.6 percent year-over-year, down from 1.0 percent in the first quarter. –CV