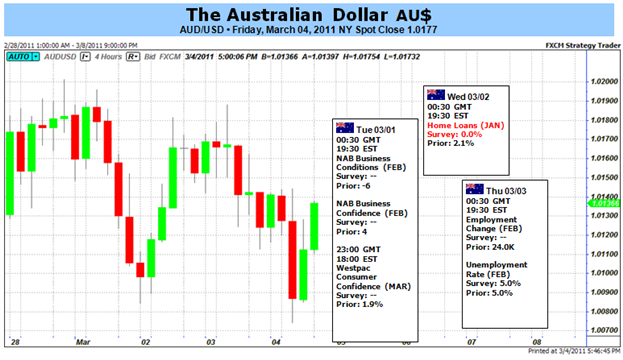 The Australian Dollar finished slightly lower on the week against its U.S. counterpart, as wide swings in equity markets coupled with volatile commodity prices gave little guidance to the Pacific Rim currency. The economic docket proved to give a mixed reading of the Australian economy, with no clear direction established as to whether or not moderate growth could be expected in the coming quarters. Consumer demand remains strong; a retail sales report showed gains for the third consecutive month in January, while consumer credit continues to expand. A stronger Aussie over the past few months appears to be harming exporters, with the trade deficit widening in the fourth quarter. Although the Reserve Bank of Australia held rates at 4.75 percent, it is clear that underlying price pressures are building. With their antipodean neighbor to the south expected to lower rates this week, investors will be closely examining the Australian economy to see if similar conditions arise in Australia that could elicit similar concerns.

While last week was heavy on event risk, the first full week of March could prove to much less busy. Few events pose serious threat to induce volatility to the markets, but two stick out immediately that suggest the antipodean currency could find direction. Wednesday’s Home Loans survey for January is expected to remain unchanged, a potential sign that the Australian housing market is starting to lose steam.

Accordingly, data shows that the ratio of house prices to rents is 56 percent overvalued; in the United Sates, that same ratio is only 3 percent. A poor reading would be a confirmation of our general bearish bias towards the Aussie, and perhaps a warning sign of things to come. Similarly, Australian labor market data is due on Thursday, and we will learn about the ramifications of the recent flooding on employment. Although the unemployment rate is expected to hold, such a reading would be positive as it would suggest that despite the hardships imposed on the economy that severe weather had, companies were able to retain employees through times of thin profits. As such, a figure within 0.1 percent of the forecasted number would likely provide optimism in regards to the direction of the economy, prompting further Aussie gains as it tries to maintain its strongest rate against the Greenback since 2008, and head towards 20-year highs against the Kiwi.

As price remains in a tight range, some lower-tier Australian economic could be the catalyst of significant price action in between the sessions of major data releases. The key question remains is “whether broader geopolitical turmoil may be enough to force a more sustained shift in ‘risk’ and a commensurate correction in financial market sentiment,” as David Rodriguez said last week.Should political unrest continue in North Africa and Spread to the Arabian Peninsula, the markets could enter a ‘risk-off’ stage, this would be the fundamental trigger needed for a sharp AUD/USD pair correction. -CV