ECB Members Weigh in on Inflation and Rates with More Urgency

Early on Friday, European Central Bank (ECB) members Nagel and Villeroy expressed a willingness to raise interest rates in the euro zone sooner rather than later. Nagel, the Bundesbank President expressed that while growth is forecast to slow, recession is not on the horizon for him. He continued to express that the window for [tighter] monetary policy measures is slowly closing and does not agree with the view that the ECB should avoid tightening due to the current state of the economy. Nagel is considered one of the more hawkish members of the ECB Governing Council while Villeroy is seen somewhere in the middle.

Villeroy kickstarted the euro’s recent lift expressing concern that inflation expectations are less and less anchored at 2% and that the euro’s weakness must be monitored as a weak euro jeopardizes the price stability objective. Additionally, he sees the neutral nominal rate between 1% and 2% but warned that real rates are set to remain negative for some time.

Euro gains are likely to be temporary, especially against the dollar and other major central banks already well into the rate hiking cycle, apart from the Bank of England (BoE). The BoE hiked by 25 basis points on Thursday but the threats to real incomes due to higher inflation and lower forecasted growth brandished the move as a ‘reluctant hike’ in my view.

Nevertheless, with the ECB only looking to hike rates after the end of its asset purchases in June means we are only likely to see any lift-off in the July ECB meeting. There is a long time between now and the July meeting. The FOMC will meet again in June where it is likely to raise rates by another 50 basis points while the market expects around 70 bps currently, despite Jerome Powell revealing that officials are not "actively" considering a rate hike of three-quarters of a percentage point at coming monetary policy meetings. US NFP data on Friday (+428K vs +391K exp) added to the already strong labor market - which Fed officials often make reference to when promoting rate hiking plans.

Euro specific scheduled risk events are light next week with the euro zone ZEW economic sentiment index set for Tuesday after a very pessimistic print regarding the state of the economy in April. Then on Wednesday, Thursday and Friday we see US CPI, PPI and Michigan consumer sentiment data. The only real risks to the current market themes of inflation and rate hiking would be if we were to see a significantly lower CPI print on Thursday which could result in a slight lift in EUR/USD but remains to be seen. 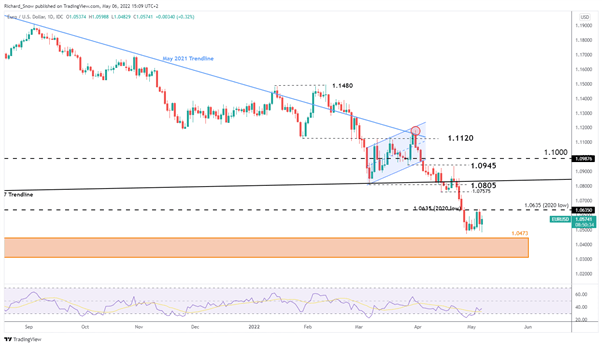