Euro Week Ahead Forecast: EUR/USD Bounce May Be Over Already 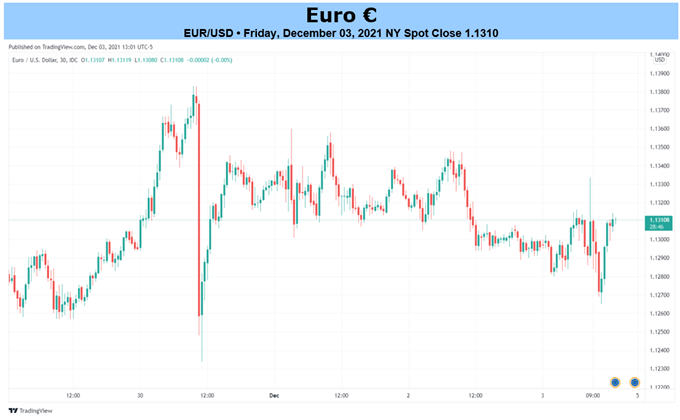 Even though EUR/USD has now been falling for more than six months, there are few signs yet that its trend lower is about to reverse. Admittedly it was relatively stable last week, either side of its spike lower Tuesday when US Federal Reserve Chair Jay Powell said the Fed was considering ending its asset buying earlier than previously planned, but an extended rally is not on the cards unless the European Central Bank has a rethink too.

To date the ECB, and particularly its President Christine Lagarde, have been adamant that Eurozone inflation will be transitory and that there is therefore no need for tighter monetary policy. It would therefore take a remarkable course change – and loss of credibility – for it to switch from dovish to hawkish; and that means further losses for EUR/USD, particularly now Powell no longer sees US inflation as transitory.

Of course, a 180-degree U-turn by the ECB is not impossible. Indeed, a Reuters story last week quoting “sources” suggested the outlook has become too uncertain for a comprehensive decision on asset buying to be reached at the December 16 meeting of the ECB’s Governing Council.Instead, while the policymakers might agree to end their Pandemic Emergency Purchase Program as scheduled in March, any decision on recalibrating their Asset Purchase Program might have to wait until February.

The argument for such a delay was emphasized last week by flash figures for Eurozone inflation in November showing a larger than expected jump to 4.9% from 4.1% in October, with German inflation up to 5.2% from 4.5%. However, the ECB’s dilemma was also highlighted by final November purchasing managers’ index data showing a record high for Italy but a 10-month low for Germany.

So, barring a course change, further Euro weakness is likely, particularly given the recent rise in government bond prices in Germany, where the yield on the 10-year Bund has dropped from a recent high of minus 0.064% in late October to minus 0.381% at the time of writing.

Turning to the coming week’s data, the schedule is light, with the highlight likely to be the release Tuesday of the latest ZEW economic sentiment index for Germany. Otherwise, the only numbers of note are German industrial production and trade figures for October, final German inflation numbers for November and the third estimate of Eurozone third-quarter GDP – none of which should affect the currency.