For Euro traders, the coming week will be dominated by Thursday’s meeting of the European Central Bank’s monetary policy making Governing Council. The ECB will leave Eurozone interest rates and its various asset-purchase programs where they are but there are still risks around ECB President Christine Lagarde’s press conference after the decisions are announced.

Speaking at an event last Wednesday, she warned that the Eurozone economy is still standing on the “two crutches” of monetary and fiscal stimulus and that these cannot be taken away until it makes a full recovery. Other ECB policymakers, including Vice President Luis de Guindos, have backed Lagarde.

However, Council members Klaas Knot and Robert Holzmann have both called for bond-buying to be tapered later this year, suggesting a split at the ECB. Therefore, if there is any hint by Lagarde that she is rowing back from her comments last week, EUR/USD will likely advance. 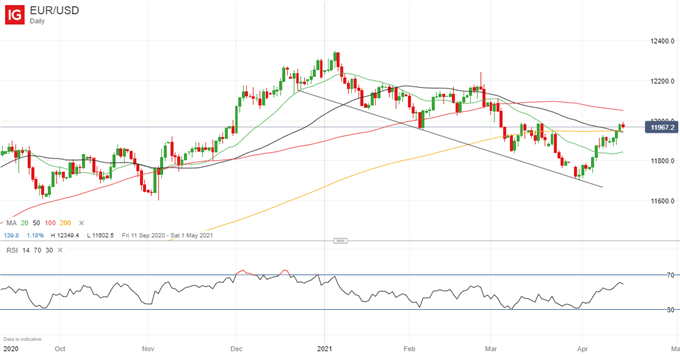 After all, the vaccination program in the EU seems to be picking up after a very slow start, with news that EU countries will now receive 50 million more coronavirus vaccines produced by Pfizer in the second quarter of 2020. Banks such as Goldman Sachs and ING have become more bullish EUR/USD too.

However, there are also concerns that the recent advance has already extended too far. Skepticism remains that economic growth in the EU will pick up at the same rate as in other countries that have more advanced vaccination programs, there are suspicions that much of the recent advance was due to short-covering and that these short positions have now been cleared out, and the 1.20 level remains an important barrier that will not just have to be hurdled but will have to be cleared by a large margin.

Recommended by Martin Essex, MSTA
Download our fresh Q2Euroforecast
Get My Guide

Once the ECB meeting is over, Friday’s “flash” April purchasing managers’ indexes for the Eurozone will be the next focus of attention. The manufacturing, services and composite PMIs are all expected to be lower than the March figures due to lockdown extensions and new restrictions in countries such as Germany, Italy and France. Here too, though, there is a risk of better-than-expected numbers that would give EUR/USD a lift.

Check out our top trading tips for 2021 by clicking here