The price of gold pares the advance following the Federal Reserve interest rate decision amid the recent rise in longer-dated US Treasury yields, and the precious metal may remain under pressure ahead of the US Non-Farm Payrolls (NFP) report as the update is expected to show employment increasing for the fourth consecutive month.

The price of gold appears to have reverse course ahead of the $1800 handle even though the Federal Open Market Committee (FOMC) retains the current path for monetary policy, and a further improvement in the US labor market may drag on bullion as it instills an improved outlook for growth and inflation.

The NFP report is anticipated to show the US economy adding 950K jobs in April, while the Unemployment Rate is seen narrowing to 5.7% from 6.0% in March, and the fresh data prints may prop up longer-dated Treasury yields as it puts pressure on the FOMC to scale back its emergency measures.

It remains to be seen if the FOMC will adjust the forward guidance at its next interest rate decision on June 16 as Fed officials are slated to update the Summary of Economic Projections (SEP), but more of the same from Chairman Jerome Powell and Co. may undermine the recovery in US yields as the committee stays on track to “increase our holdings of Treasury securities by at least $80 billion per month and of agency mortgage-backed securities by at least $40 billion per month.” 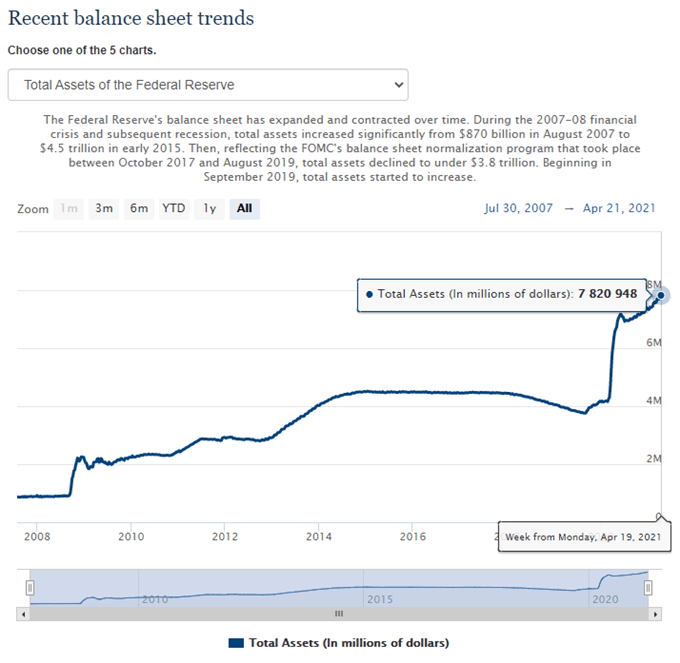 The ongoing expansion in the Fed’s balance sheet may cap US Treasury yields as it climbs to a fresh record high of $7.821 trillion in the week of April 19, but signs of a stronger economic recovery may encourage the FOMC to change its tone ahead of the second half of the year as the central bank pursues an outcome based approach for monetary policy.

With that said, the recent rise in US yields may lead to a further decline in the price of gold as the 10-YearTreasury yield recovers after defending the April low (1.53%), and the precious metal may reestablish the downward trend from earlier this year if the update to the NFP report instills an improved outlook for the US economy.