Australian Dollar Outlook is Caught in Commodities Whirlwind as Risks Kick In.

The Australian Dollar has had a wild ride this week as the implications of the Russian invasion of Ukraine continue to ricochet through markets.

Commodity markets bolted higher at the start of the week, pushing AUD/USD to a high of 0.7441. Energy, industrial metals, precious metals and agriculture all joined the party, recording new peaks across the board.

The rest of the week saw an unwind of these moves to varying degrees and going into the weekend, AUD/USD has been caught in a risk-off event that it had managed to avoid of late.

This could be a risk rotation back to a scenario that sees the Aussie vulnerable to market sentiment. Until now, booming commodity prices had sheltered the AUD from the impacts of negative risk sentiment.

The Federal Open Market Committee (FOMC) of the Federal Reserve will be meeting this coming week and the market has priced in a 25 basis-point hike that has been well telegraphed by various members of the board.

Although the market has priced in several more rate rises to the end of the year, question remains around the impact that the war could have on the Fed’s thinking.

The RBA on the other are not expected to raise rates anytime soon. In a speech on Friday, Governor Phillip Lowe kept his powder dry by remarking that “it’s plausible that interest rates will rise this year,” and then went on to say, “there were plausible scenarios where rates didn’t rise until next year.”

In any case, the RBA have said they won’t do anything with rates until they see first quarter CPI, which will be released in late April.

Jobs numbers are due out on Thursday and a Bloomberg survey has expectations of 50k additions to employment in February and an unemployment rate of 4.1%.

Despite the Fed meeting this week, the interest rate environment looks to have taken a back seat for now. The coming week appears likely to see more volatility.

The uncertainty for AUD going forward is dependent on the key question of whether or not elevated commodity prices can overcome risk aversion. The domestic fundamental backdrop for AUD remains firm, but external factors could make it vulnerable to sways in risk sentiment. 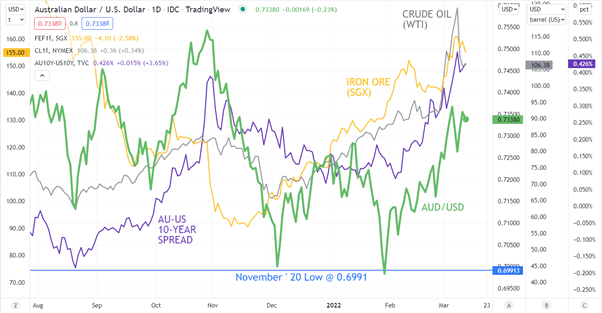