Australian Dollar Outlook: Is the US Dollar in the Driver’s Seat for AUD/USD?

The Australian Dollar seems to be at the whim of external factors once again. While the Reserve Bank of Australia sits on its hands, the Federal Reserve in the US is gearing up for almighty battle to get runaway inflation under control.

Rate hikes loom for the US after the headline annual US consumer price index (CPI) hit 7.5% this week. It was 0.3 percentage points above expectations and the highest level since 1982.

In that era, Paul Volker was the Chair of the Federal Reserve and had the backing of 2 White House administrations, from both sides of the aisle, to reign in accelerating prices. Severe increases in borrowing costs eventually brought CPI under control, but it came at the cost of 2 recessions.

Ultra-loose monetary policy for an extended period has the US potentially facing this prospect today. While a March lift-off for rates has been telegraphed by the Fed, market expectations of the speed of the anticipated increases have accelerated.

The entire US Treasury yield curve lifted after the CPI number, more so in the shorter end. The chart below shows the yield on the 1, 2, 5, 7, 10, 20 and 30-year Treasuries. Many parts of the Treasury curve are back to where they were before the pandemic. 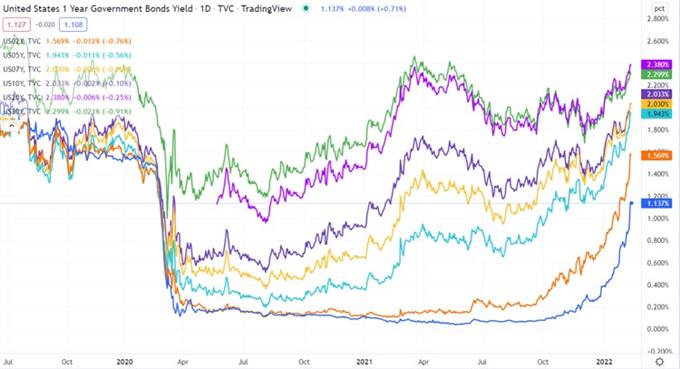 There is growing commentary that the Fed might be making a policy mistake if they do not act fast enough now. The conundrum facing the Fed are the questions around ‘what does full employment look like?’ and ‘is this high CPI structural or temporary?’

There is a growing perception in the market that the US is at full employment and inflation is becoming entrenched.

In any case, rates hikes are coming in the US and not for a while in Australia. This is supportive of the US Dollar. This disparity in interest rates could see AUD/USD move lower.

Looking at the charts below, commodity prices appear to be on the back burner for now. This has seen Australian terms of trade at record highs. The market seems to be ignoring this for now.

Looking ahead, Australian jobs numbers will be released on Friday this week. 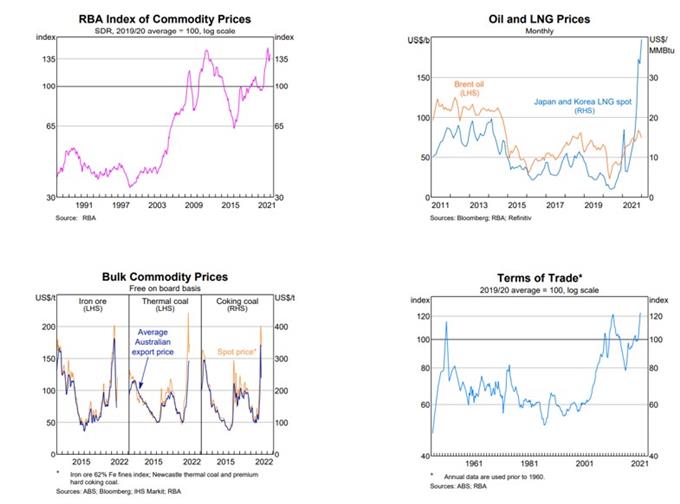 --- Written by Daniel McCarthy, Strategist for DailyFX.com To contact Daniel, use the comments section below or @DanMcCathyFX on Twitter