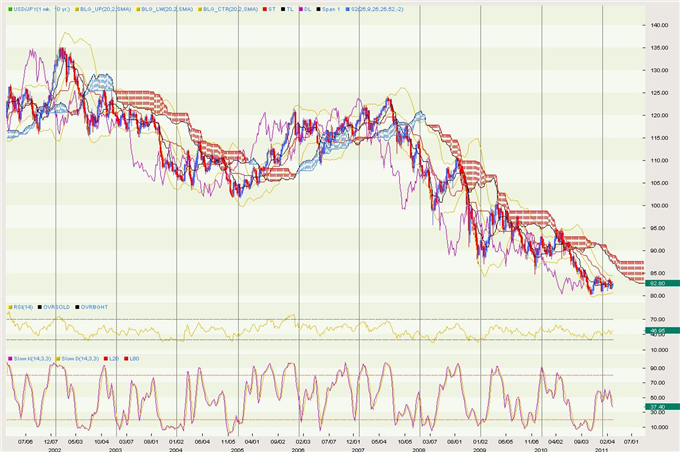 The market has been in the process of consolidating over the past several weeks just off the record lows from 1995 by 79.75. While some would classify the consolidation as bearish, we contend that the price action is more characteristic of the formation of a major long-term bottom. Look for a break and weekly close back above 84.50 to strengthen our constructive outlook and open the door for a fresh upside extension towards parity. Inability to establish above 84.50 keeps the pressure on the downside. 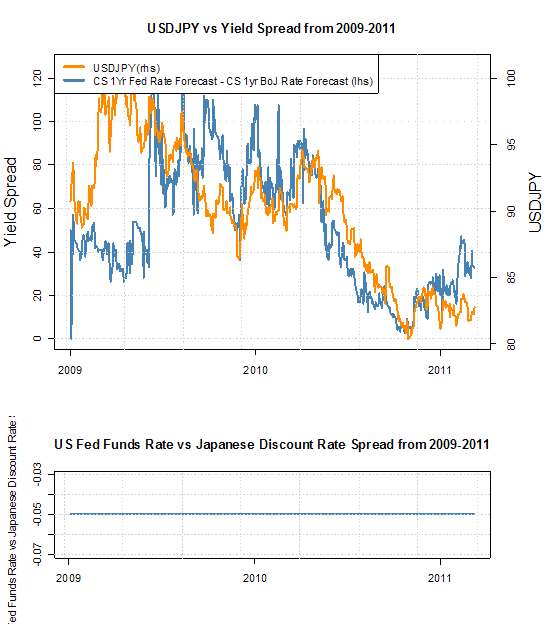 The US Dollar/Japanese Yen pair has reacted to only the largest shifts in US Federal Reserve and Bank of Japan interest rate forecasts, and recent price action suggests sovereign bond yields remain more relevant to USDJPY price action. The correlation between the USDJPY and the benchmark US Treasury 10-Year Note continues to trade near the top of its range.

Higher US Treasury yields have generally translated into US Dollar strength, and a general uptrend in Treasury yields could support the Greenback through the foreseeable future. Whether this is enough to force a USDJPY break of its long-standing range is less clear, however. Traders show relatively little appetite to push the USDJPY beyond its 5-month triangle formation. It will be critical to watch technical developments in the US Dollar/Japanese Yen pair. 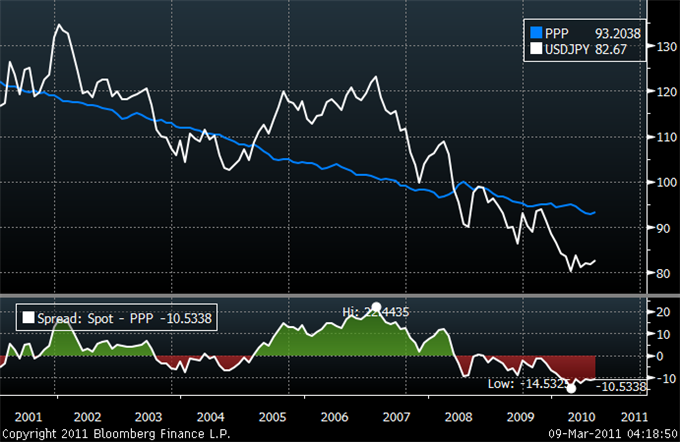 The Yen continued to erase of the spot exchange rate’s disparity with the PPP-implied fair value for a second month through February, but USDJPY remains firmly in undervalued territory. The overall picture remains bullish: consensus forecasts suggest Japanese economic growth will underperform that of the US by an average of 1.6 percent this year and in 2011, helping to narrow the US – Japan yield spread in favor of the greenback. Funding the gargantuan US budget deficit will encourage this dynamic as a wave new bond issuance sends prices lower and pushes Treasury yields upward, taking USDJPY along for the ride. Indeed, looking at data since 1978 (the first full year since the demise of the Gold Standard), regression studies suggest that well over 70 percent of the variance USDJPY is explained by variance in the return on 10-year US Treasury notes. Over the near term however, continued turmoil in the Middle East and its impact on oil prices threatens to keep a lid on risk appetite, suggesting the Yen will continue to find support every time a flare-up in the region spurs an unwinding of carry trades funded cheaply in the perennially low-yielding currency. On balance, while the overall outlook remains bullish, its realization may have to wait until the clouds having over the geopolitical landscape dissipate.