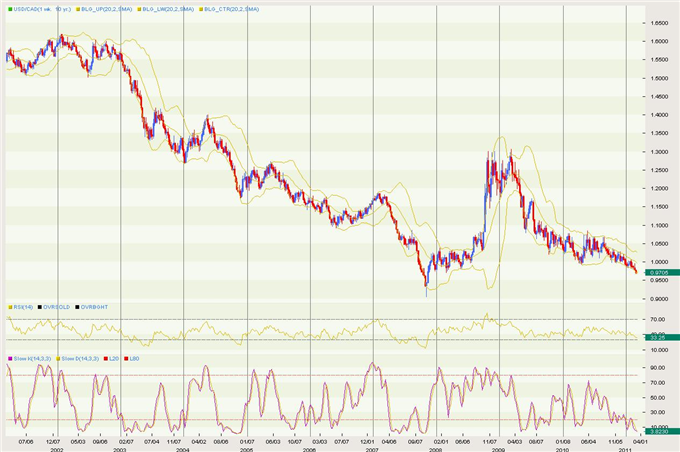 Medium-term studies are starting to look a little stretched, and this in conjunction with longer-term cyclical studies which warn of a major base, leave us looking for opportunities to buy rather then selling into the downtrend. The latest dip below the 0.9700 figure is viewed as an excellent opportunity to establish a very playable counter-trend long position. Ultimately, only a weekly close back below 0.9700 would delay outlook and give reason for concern. Meanwhile, a break and weekly close back above 0.9800 strengthens outlook. 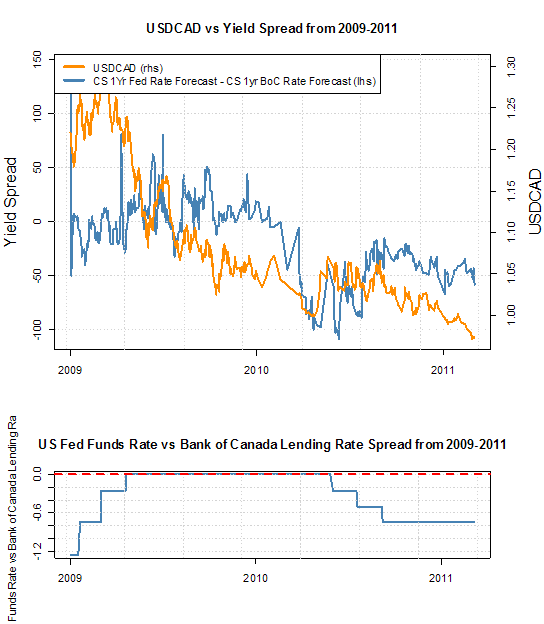 The US Dollar/Canadian Dollar pair has traded independently of yield forecasts for some time now, and we expect this may continue to be the case as the commodity currency reacts to shifts in raw materials prices. Crude oil futures have surged amidst geopolitical tensions in the Middle East. And though the Canadian Dollar’s correlation to benchmark oil prices has weakened as of late, we would expect the USDCAD to remain under pressure on continued rallies in energy commodities.

Currently modest rate expectations for both the Bank of Canada and US Federal Reserve suggest it will take a noteworthy shift in rhetoric to move the USDCAD through the foreseeable future. 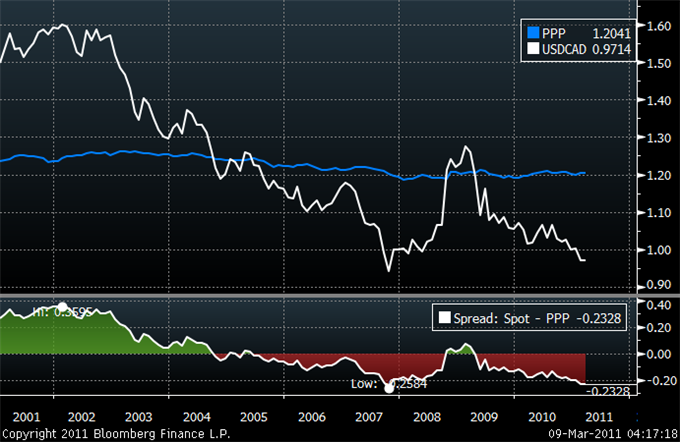 USDCAD drifted further into undervalued territory in February, with prices now 19.3 percent removed from their PPP-implied fair exchange rate. The pace of the recovery in the US – the destination for over 80 percent of Canada’s exports – is the key driver over the near term, as evidenced by the firm inverse correlation between USDCAD and the S&P 500. With US economic data looking increasingly encouraging and the inflation rate nudging closer to the upper edge of the target band at 3 percent, a further widening of the value disparity seems likely as rate hike expectations mount. Indeed, a Credit Suisse gauge of traders’ one-year rate hike bets now stands at the highest in seven months. On balance, while the purely valuation-based implications of current positioning point to a bullish bias, the Loonie looks likely to extend gains versus its US namesake before a meaningful reversal presents itself.