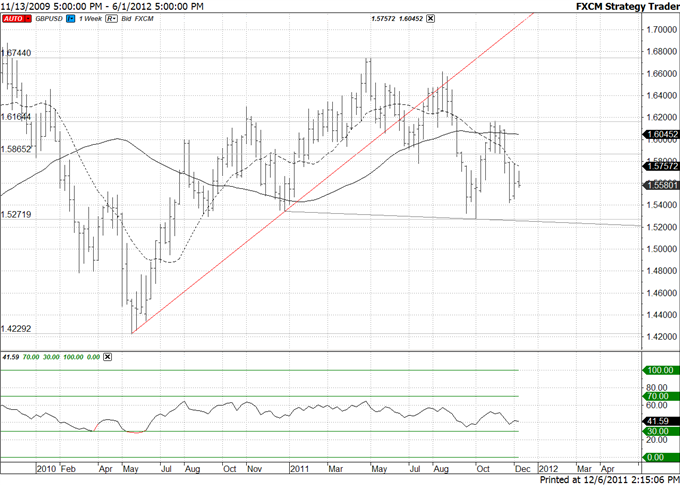 Like the EURUSD, the GBPUSD appears to be carving out a head and shoulders top from the November 2010 high. The downward sloping neckline makes this version particularly bearish however. A drop under 15272 (October low) is required in order to trigger the head and shoulders break. Until then, respect range potential between 15400 and 15865-16100. British Pound versus US Dollar interest rate differentials have remained relatively unchanged for some time now, giving little reason to expect they will influence the GBPUSD through near-term trading. Traders predict that the US Federal Reserve and Bank of England will have roughly equal interest rates in a year’s time. Barring any significant changes in market forecasts, we should look for other sources to drive GBPUSD volatility.

According to recent correlation studies, the link between the British Pound/US Dollar pair and Dow Jones Industrial Average trades near record strength. In other words, the GBPUSD tends to strengthen when the DJIA rallies and vice versa.

We expect the GBPUSD to continue to move with broader markets, making interest rate differentials less important as far as trends are concerned. 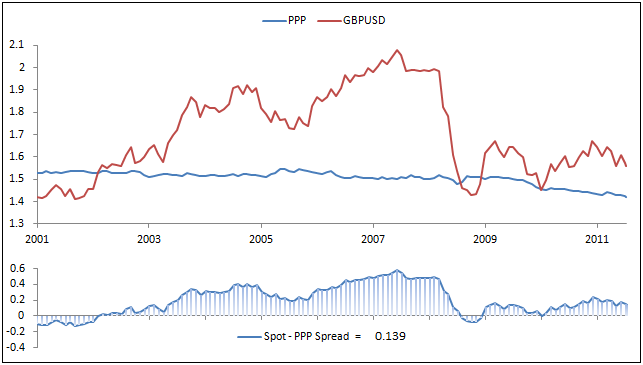 The British Pound remains the least overvalued currency against the US Dollar on a relative basis, trading just 8.9 percent above its PPP-implied exchange rate. An increasingly significant correlation with the S&P 500 suggests Eurozone-driven risk aversion is poised to force continued contraction in the value disparity, but if a meltdown in the currency bloc does indeed materialize then capital inflows searching for a regional alternative to the Euro may mitigate the downside. Absent outright Eurozone disintegration however, the downside scenario seems compelling considering additional domestic headwinds from renewed quantitative easing, which seems likely to continue as existing downward pressure from austerity measures on economic growth are compounded by slowing export growth to a weakening Continent.