This market continues to show signs of recovery, with the price most recently establishing back above psychological barriers at 1.6000. From here, look for a weekly close above 1.6300 to open the next upside extension towards multi-week and medium-term resistance at 1.7040. However, inability to establish above 1.6300 on a weekly close basis will suggest exhaustion and the potential resumption of broader downside pressures exposing 1.5300. 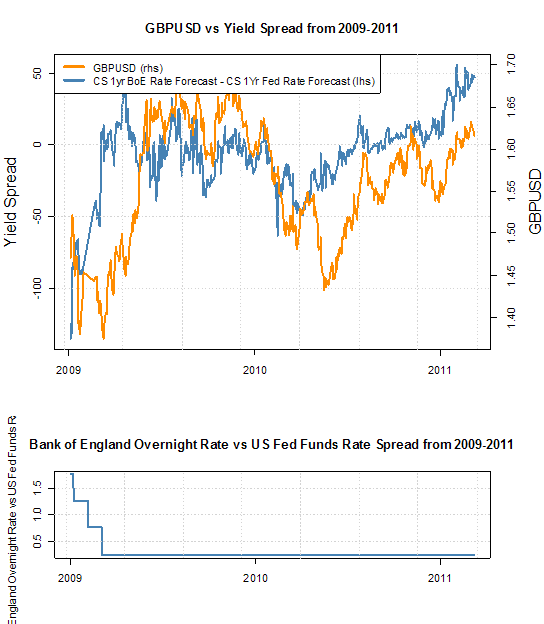 The British Pound recently strengthened on a noteworthy improvement in Bank of England interest rate forecasts, and Overnight Index Swaps currently show the most bullish expectations in nearly two years. Yield expectations bounced noticeably when a third member of the Monetary Policy Committee voted in favor of higher interest rates at their most recent meeting. The ensuing statement likewise showed that MPC members deem risks to inflation remain to the topside, and markets now predict that the BoE may begin raising rates by as soon as May.

Interest rates remain broadly supportive of the British Pound. Whether or not that will be enough to sustain the continued uptrend is another matter, however. Recent CFTC Commitment of Traders data showed that Non-commercial traders—typically large speculators—hit their most net-long GBPUSD since the pair traded above the 2.00 mark. The potential bullish extreme warns that the pair could correct lower through short-term trade.

The Pound edged higher in February, widening the gap between spot and the PPP-implied exchange rate to the largest in 29 months. The disparity may grow further still until a meaningful correction is at hand, with cues from the Bank of England over recent weeks suggesting policymakers are increasingly determined to act against stubbornly rising inflation. Indeed, the Bank’s latest quarterly inflation report seemingly validated expectations of at least 50 basis points in rate hikes through 2011. Traders have taken notice, with interest rate futures now pricing in the first increase as soon as June. On balance, while the strictly valuation-based approach points to a bearish bias, its realization seems unlikely for the time being.