Euro Forecast to Fall Into the Third Quarter as Crises Intensify

Important changes in Euro Zone emergency measures lifted investor spirits and left many optimistic that the worst of the European crises may be through. Yet there remain substantial risks ahead, and it may take truly seismic shifts in Euro Zone policies before we can claim crises are over.

Second Quarter was Potential Turning Point for Euro – What will Third Bring?

The second quarter of 2012 saw the Euro move sharply lower against the US Dollar on a clear deterioration in existing Euro Zone economic and fiscal crises. Current problems began in late 2009 and early 2010 in Greece, culminating in the first of what are now two Greek bailouts in April, 2010. We’ve emphasized all along that Greece represents a mere 0.2 percent of all Euro Zone GDP—theoretically posing little danger to the broader region. Yet the pressing issue has and will continue to be contagion of Greek troubles elsewhere, and that is precisely what we saw in the second quarter of 2012.

The Euro Zone’s fourth-largest economy in Spain saw an important deterioration in market conditions which exacerbated pressures on the Euro currency. Spanish government bond yields—the price paid to finance its fiscal debt and deficits—ballooned to highs of 7.16 percent. It was above the 7 percent bond yield mark that Greece, Portugal, and Ireland were forced to seek international bailouts. 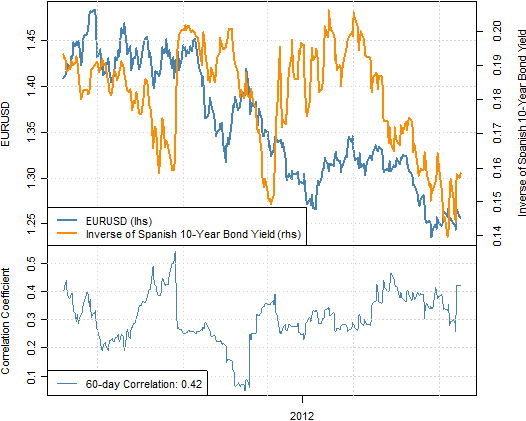 Spain is the fourth-largest economy in the Euro area and is nearly five times the size of Greece, and indeed bond yields above 7 percent forced the Iberian country to seek a bailout for its at-risk banking system. The central Spanish government was technically spared as bailout funds are directed squarely at domestic banks, but there is reason to believe that lead fiscal authority may itself need help. With domestic unemployment near 25 percent and the country still firmly in recession, it will prove very difficult for Spain to continue financing its debt amidst persistent fiscal deficits.

A much-anticipated European summit eased some of the worst fears for Spain and other core countries as officials agreed to use existing European Financial Stability Facility (EFSF) and eventually the European Stability Mechanism (ESM) to bolster at-risk government bond markets. Countries likewise instituted to a “growth compact”, which involved assurances that calls for further budget cuts and fiscal austerity would be balanced with increased spending of unused EU funds to needy countries.

The changes look good in principle, but the devil is always in the details and there is really no guarantee that individual Euro area members will ratify them—much less put their full faith behind them once in force. European issues are far from over, and Euro price action in the third quarter will almost definitely be driven in large part by further developments in the worst fiscal crises since the inception of the single currency. This is particularly true for themes such as the new growth compact and the ratification of existing agreements to help ease market tensions.

Currency Trading speculators pounced on Euro Zone stresses to aggressively sell into Euro declines against the safe-haven US Dollar. In fact, we would argue that such incredibly one-sided positioning has been as-large an influence on price action as the European crises themselves. Why exactly?

The Euro saw an important bounce off of multi-year lows through the month of June, leaving hopes that it may stage a larger recovery into the third quarter. Yet it is critical to note that key positioning measures show that the bounce likely occurred as traders scaled back aggressive bets on Euro declines. In other words—it wasn’t renewed buying that pushed the Euro higher; it was a simple pullback in short positions. 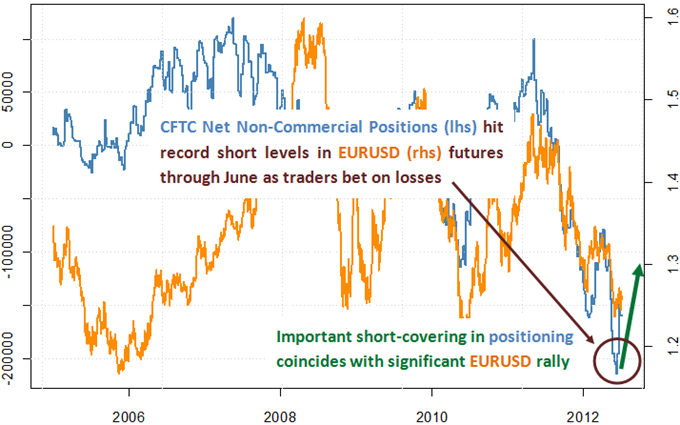 It becomes clear that we will need to see a substantial shift in positioning and sentiment to signal that Euro has a sustainable chance at reversal. Else we believe that sentiment/positioning, fundamental developments, and technical forecasts point to further Euro weakness through the third quarter. Of course, it’s important to note that the Euro/US Dollar pair likewise depends on the US currency itself.

The US Dollar stands to strengthen against the Euro amidst continued European tensions as it retains its status as the world’s foremost safe-haven currency. What could alter the US Dollar landscape?

Will the US Federal Reserve Institute Quantitative Easing Part 3?

Unconventional US Federal Reserve monetary policy arguably remains the largest risk to the US Dollar’s status as the world’s foremost safe-haven currency. The Fed sunk the Greenback when it instituted unprecedented Quantitative Easing measures in 2008/2009 and again when it began Quantitative Easing Part 2 (QE2) in 2010. A key question is whether the US Dollar may once again fall further if and when the Fed institutes the third wave of Quantitative Easing (QE3). Some claim that QE3 is quite likely and a major risk to the US currency. Yet the Fed deferred further QE through the second quarter, and it would likely take a substantial worsening in economic and financial conditions to force a change in tack. 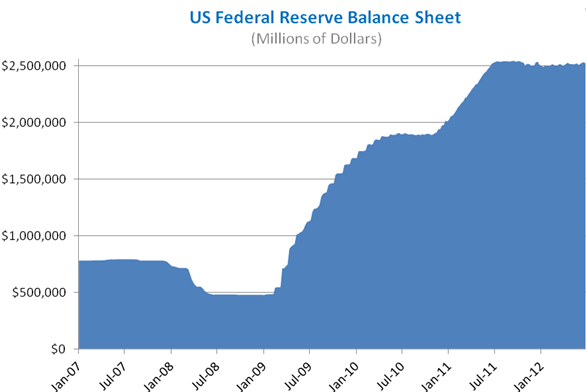 Will further deterioration in US economic data warrant another wave of Quantitative Easing and sink the US Dollar? Stubbornly high unemployment and relatively low inflation levels bolster expectations that the Fed could ease further. Yet that’s far from certain, and we’re not necessarily convinced that QE3 could in fact be enough to sink the US currency. Why? Such aggressive measures would likely coincide with a material weakening in financial market conditions. In other words, the need for further QE would likely drive safe-haven US Dollar demand and offset the inflationary effects of the printing press.

Trends are clear and favor further US Dollar strength against the Euro, but timing trades will come down to shorter-term price moves and technical forecasts for the EURUSD.

Medium-term technical studies continue to point to additional weakness, and we prefer to sell rallies.

The topside failure in 2011 now opens the door for the current downside extension which should ultimately look to retest and eventually break below the 1.1875, June 2010 lows to confirm the next lower top at 1.4940 and potentially open a deeper drop towards 1.1500. 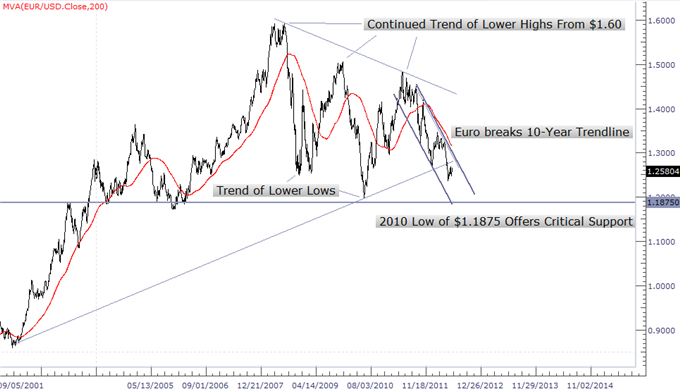 As such, our outlook for the third quarter of 2012 is predominantly bearish while the market adheres to the broader underlying downtrend, and we would expect to see a move towards 1.1875 at a minimum before considering the potential for any meaningful recovery.

In the interim, any upside should therefore continue to be very well capped, with overbought short-term rallies towards 1.3000-1.3200 viewed as compelling opportunities to look to build on short positions. Ultimately, only a 2-week close back above 1.3500 would delay outlook and give reason for concern.

If Risk Implodes, Which Currencies Stand to Suffer or Soar?
Advertisement