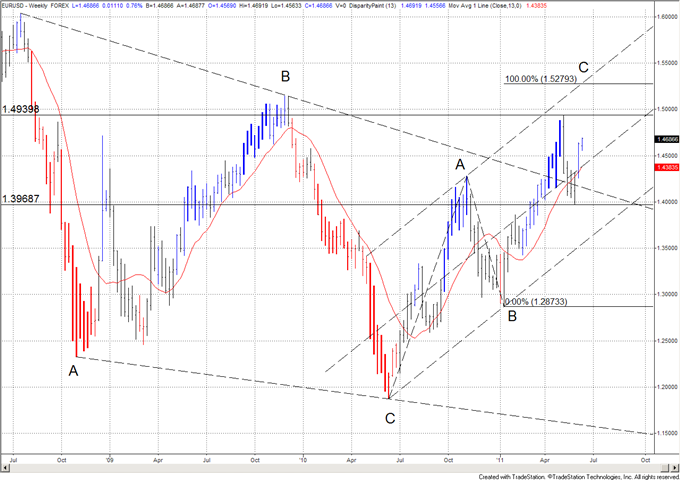 Euro - US Dollar Technical and Fundamental Forex Forecast for June

The EURUSD uptrend remains intact following the dip to 14000. The count we’ve been following for several months is presented above, in which a large triangle or flat is underway from the 16000 high. The implications are for a move above 14940 and test of parallel channel resistance before a multiyear decline gets underway. There is an objective (100% extension) at 15279 to keep in mind as well. Follow the Daily Technicals for near term developments but it is worth mentioning here that former support at 14750 may provide resistance early this month. 14515 and 14425 are supports. 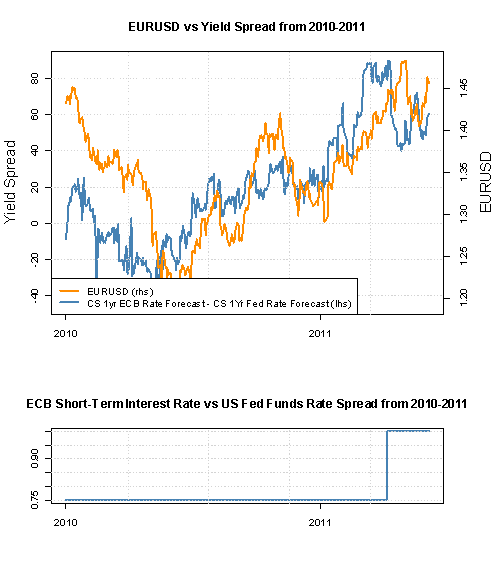 Considerable moderation in both US Federal Reserve and European Central Bank interest rate expectations has had little net-effect on the Euro/US Dollar pair, but bearish Fed expectations leave yield-based forecasts firmly in favor of EURUSD gains. A sharp disappointment in May US Nonfarm Payrolls data further curtailed hopes that the Fed would move to normalize monetary policy through the foreseeable future. Overnight Index Swaps now show that US interest rate expectations are at their lowest since December, 2010, and short-term yields are likely to remain near record-lows.

On the European side, the ECB looks likely to move interest rates at its July meeting as year-over-year Consumer Price Index inflation rates remain well-above official targets. A key question remains, however, on how the ECB will react to further fiscal debt crises in the euro zone—particularly with Greece. There is legitimate risk that the ECB could hold rates as the single currency union sees periphery bond yields rise sharply. A hold in interest rates would almost certainly produce short-term euro weakness across the board and remains a key downside risk for the EURUSD.

Fiscal debt crises are of course relevant onto themselves. Markets anxiously await the resolution of ongoing EU/IMF/ECB negotiations. Any aggressive action on Greek government debt could likewise force euro losses. 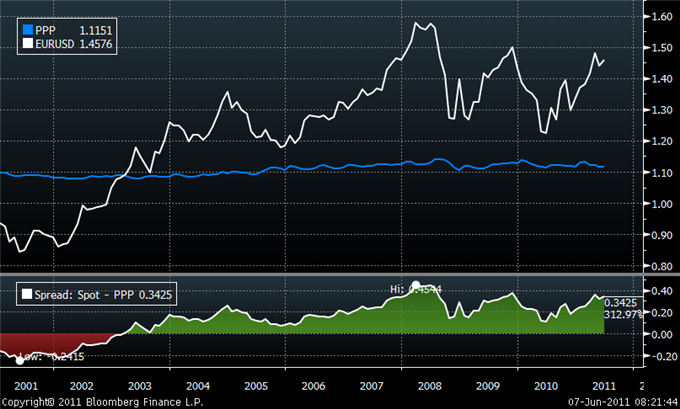 The Euro remains acutely overvalued against the US Dollar, trading 23.5 percent above its PPP-implied fair exchange rate. While this implies a bearish forecast, the pair may push deeper into expensive territory considering the ECB now boasts the most robust 12-month interest rate hike outlook among the majors. Still, the specter of sovereign debt woes remains ever-present and a flare-up of solvency concerns for the common market’s periphery members (especially the larger Spain and Italy, whose rescue would be beyond the scope the of the existing EFSF bailout fund) may yet sour investors’ chipper attitude toward the single currency. The looming end of QE2 offers another driver for the eventual correction lower as US yields are allowed to rise to reflect the States’ swelling budget deficit, narrowing the Euro’s interest rate advantage and forcing a correction lower in the EURUSD exchange rate. For the time being however, betting on a meaningful reduction in the valuation gap seems premature.

We always want to hear your feedback on DailyFX articles. Want more content like this? Less? What do you want to see? Send e-mails to drodriguez@dailyfx.com, ispivak@dailyfx.comand jsaettele@dailyfx.com