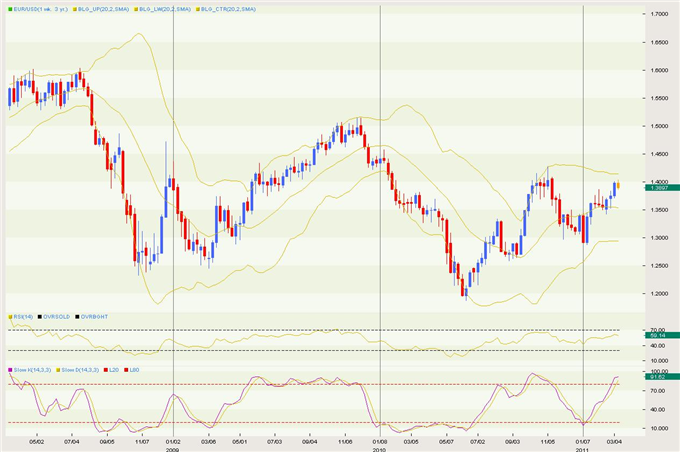 The market has been well bid over the past several weeks with the rally now looking to mount an assault on the critical medium-term highs from November 2010 at 1.4280. Look for a weekly close back above 1.4000 to reaffirm bullish outlook and accelerate towards 1.4280, while any setbacks should be well supported ahead of 1.3500. Ultimately, only a weekly close back below 1.3425 negates bullish momentum and gives reason for pause. 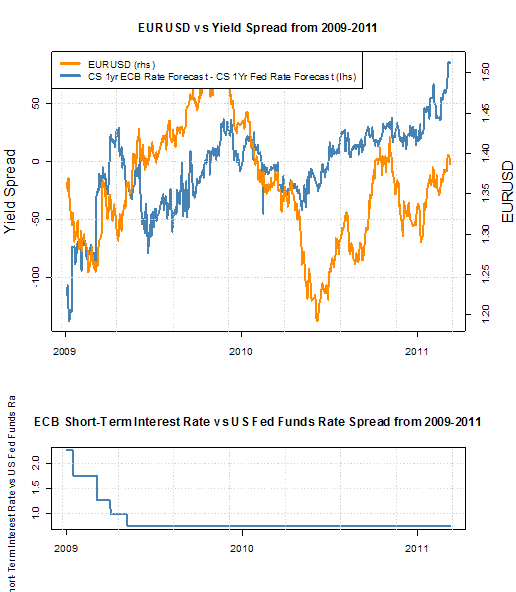 An important improvement in European interest rate expectations led to a similarly sharp Euro rally, and recent interest rate trends support the case for further EURUSD gains. Yet a noteworthy deterioration in European fiscal bond yield spreads warn that fundamentals are far from straightforward in the single currency block. ECB President Jean Claude Trichet surprised markets in claiming that the bank expressed “strong vigilance” on price risk—a thinly-veiled declaration that the bank was likely to raise rates at its upcoming meeting. Overnight Index Swaps now price in a cumulative 121 basis points of ECB rate hikes in the coming 12 months—the largest such sum in at least five years.

Yet further turmoil in euro zone sovereign debt markets cannot be dismissed, and strong interest rate forecasts hardly guarantee continued euro gains. The spread between the benchmark 10-Year Portuguese Government Bond and the equivalent German issue currently stands at a record wide and underlines current market stress. The Euro has stood firm despite clear concerns over periphery debt. Yet one gets the sense that it may only be a matter of time before debt concerns override yield considerations. Significant funding needs mean that Portugal and other at-risk nations must issue further debt through the year. Rising ECB interest rate targets could perversely enhance risks to the single currency. 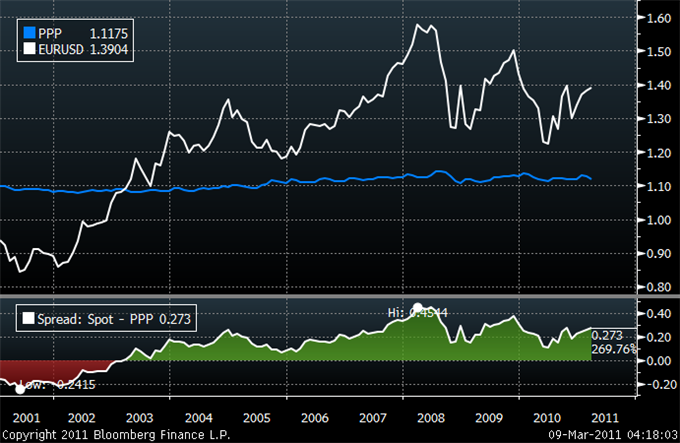 The Euro remains significantly overvalued relative to the US Dollar, with the gap between spot and the PPP-implied fair exchange rate widening through February after rising inflation figures encouraged a materially hawkish shift in ECB rhetoric. Indeed, interest rate futures suggest traders are now pricing in an increase as soon as July. The Euro’s ability to capitalize on rising yields will be directly dependent on EU policymakers’ ability to quash sovereign risk fears however, with the moment of truth coming on March 25 as the region’s leaders meet for a summit that promises to produce a “grand bargain” on dealing with debt-ridden member states. In the meantime, a batch of over $30 billion in expiring periphery debt is set to be rolled over at substantially higher interest rates over the next 30 days, keeping investors on edge and hinting that a period of weakness is likely heading into the end of the month. With that in mind, the path of least resistance over the near term seems to lead downward.