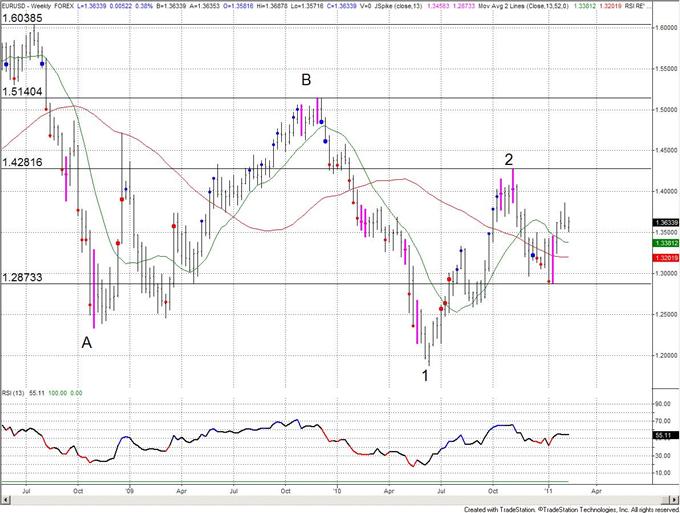 The EURUSD trades near the midpoint of the last several years’ 16038-11875 range. Quite simply, price has trended lower on balance since the 2008 top and the long term trend remains bearish as a result. Swings since the 2008 top are all in excess of 20% with the latest rally from 11875 to 14282 at 20.3%. From an Elliott perspective, the drop from 14282 most likely constitutes a 3rd wave at multiple degrees of trend. This means that the fastest and most violent part of the decline has yet to occur. The last two weekly candles are bearish (spinning top and reverse hammer) as well. When viewed in the context of the daily wave pattern, the EURUSD is in an especially vulnerable position. 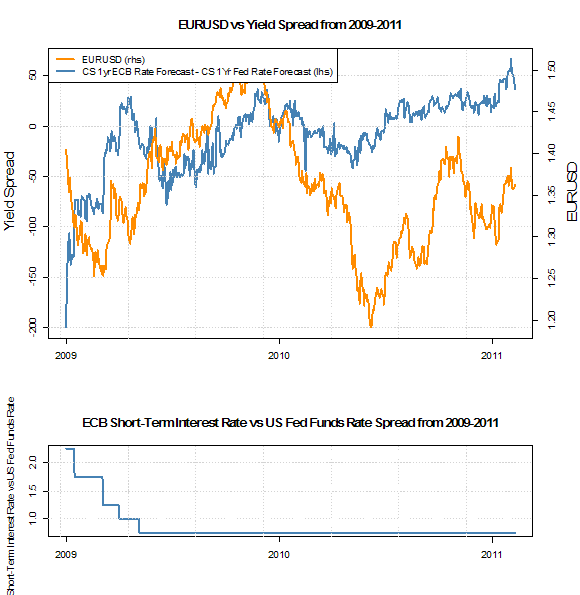 The Euro saw considerable support against the US Dollar on rising European Central Bank interest rate expectations, but a sharp correction in forecasts proved the catalyst for a noteworthy EURUSD pullback. Overnight Index Swaps now predict that the ECB will raise rates by 82 basis points through the coming 12 months. Though this is an important advantage over the US Dollar, recent price action suggests that the spread in yield expectations may continue to narrow through the foreseeable future.

All else remaining equal, a smaller Euro/US Dollar yield spread should support the beleaguered US currency in months ahead. Key considerations will include developments in the US labor market. Markets shrugged off a sharply disappointing January US Nonfarm Payrolls report as inclement weather had a substantial impact on jobs data. Yet February’s report should clarify whether job growth has truly turned the corner for the world’s largest economy. Given the Fed’s reluctance to normalize monetary policy in the face of a sluggish job market recovery, any surprises in either direction could have significant influence on yield expectations and the US Dollar itself. 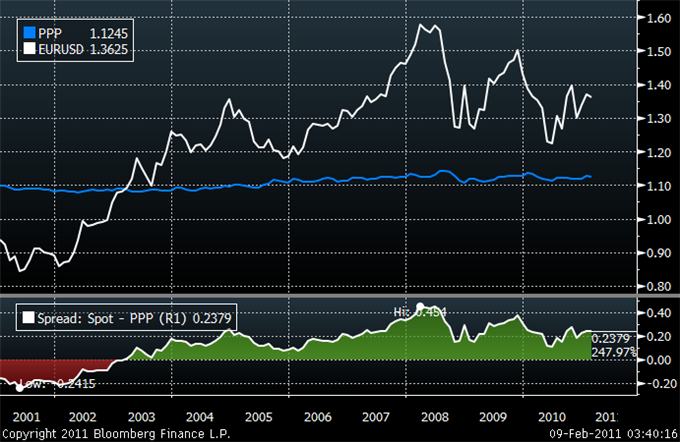 The Euro continues its long-term descent since prices put in an overvaluation peak in mid-2008. Broadly speaking, the top reasons to sell remain unchanged, from the as-yet unresolved debt crisis to the Euro Zone’s periphery to the likely narrowing of the EU – US yield gap in favor of the greenback considering consensus forecasts call for economic growth in the States to outpace that of the currency bloc by a hefty 1.5 percent over the next two years. Looking at February in isolation however, a larger counter-trend rise seems plausible as rising headline inflation keeps the focus on rate hike expectations until sovereign stress returns as a driving force behind price action along with a large tranche of periphery bond maturities in March and April. Still, any extension of the rally noted over the past two months appears corrective, giving the bears a new opportunity to enter short.