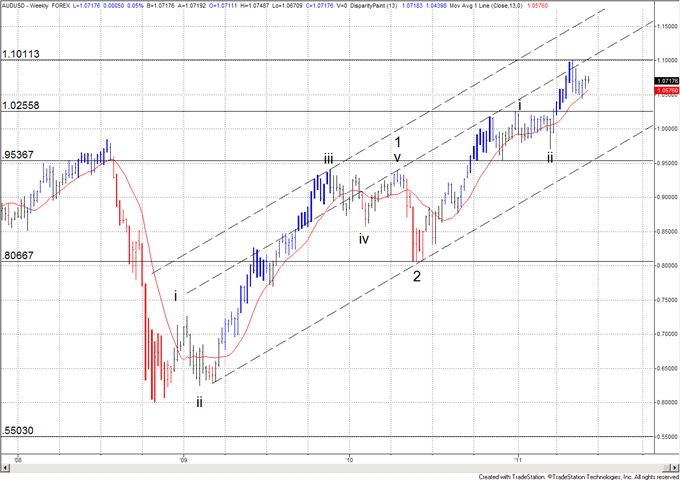 The reversal in early May leaves the uptrend, at least over the next few months, in doubt. Near term, the decline from the top takes the form of a leading diagonal (either wave A or 1 of a 3 or 5 wave bear move). The recovery may extend to 10900 (former resistance) but the implications over the next few weeks are bearish and for a test of the 10200/55 breakout area. 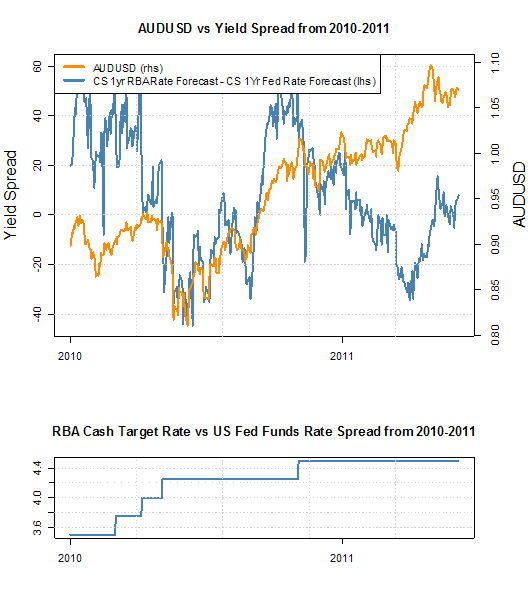 The Australian Dollar continues to benefit from the highest short-term interest rate of any G10 currency, and Overnight Index Swaps show that its yield advantage over the US Dollar is likely to grow through the coming 12 months. Said expectations only reinforce the currency pair’s sensitivity to yields, and interest rate-based currency forecasts call for continued AUDUSD strength. Yet whether the antipodean currency can continue to appreciate on yields alone will very much depend on broader financial market risk sentiment and the performance of key risky asset classes.

Investors will often pour into highly speculative bets on high-yielding currencies when the risk of substantial exchange rate moves seems remote. That is to say: when the sun is shining and all is well with the Dow Jones Industrial Average and other key ‘risk’ barometers, the high-yielding AUD is an attractive bet against the low-yielding US Dollar. Yet the Dow Jones may post its sixth-consecutive week of declines in what would be the first such occurrence since 2002. It will be important to watch how ‘risk’ develops as we gauge whether the Australian Dollar is likely to rally further. 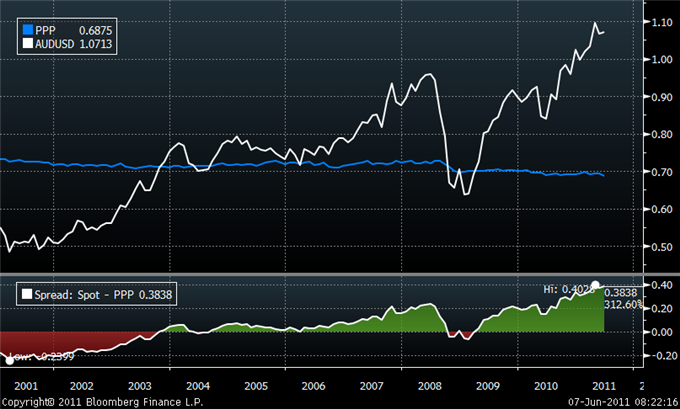 The Australian Dollar remains the most overvalued major currency against its US namesake. Indeed, prices are trading at a hefty 35.8 percent premium to PPP-implied fair value. A snap-back looks increasingly imminent as the Federal Reserve allows QE2 to expire – opening the door for a rise in US borrowing costs – while the RBA has solidified itself at neutral for the remainder of the year. Indeed, priced-in rate hike expectations suggest the RBA is the only non-US central bank other than the Bank of Japan that is forecast to not to hike interest rates until the second half of 2012. The narrowing of yield spreads that this implies points the way lower, making for an attractive selling opportunity in the works. Continued slowdown in China – Australia’s top trading partner – further reinforces this trajectory as Beijing struggles to gently put the brakes on its buoyant economy to tame inflation. With that in mind, the timing of a reversal remains tricky as it remains to be seen how robust of an increase in US yields will actually take place after QE2 expires.

We always want to hear your feedback on DailyFX articles. Want more content like this? Less? What do you want to see? Send e-mails to drodriguez@dailyfx.com, ispivak@dailyfx.comand jsaettele@dailyfx.com.