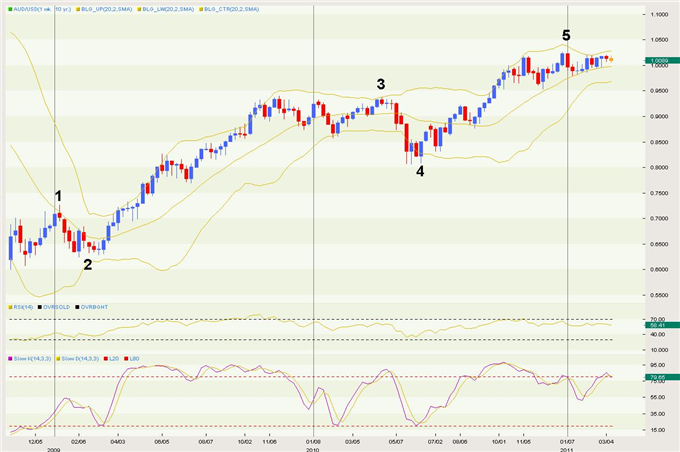 Although medium-term setbacks have stalled out for now ahead of 0.9800, we continue to favor risks for additional downside and like the idea of selling into current rallies. Ultimately, we see the market in the process of carving out a major top and any rallies from here should be well capped below 1.0200 on a weekly close basis. Only back above 1.0200 gives reason for concern, while a weekly close below 0.9800 should accelerate to 0.9535 and below. We rarely incorporate wave counts into our analysis but we also can not ignore a very pretty count which suggests that we are in the process of completing the final wave of a major up-trend. We credit on this count to colleague Jamie Saettele. 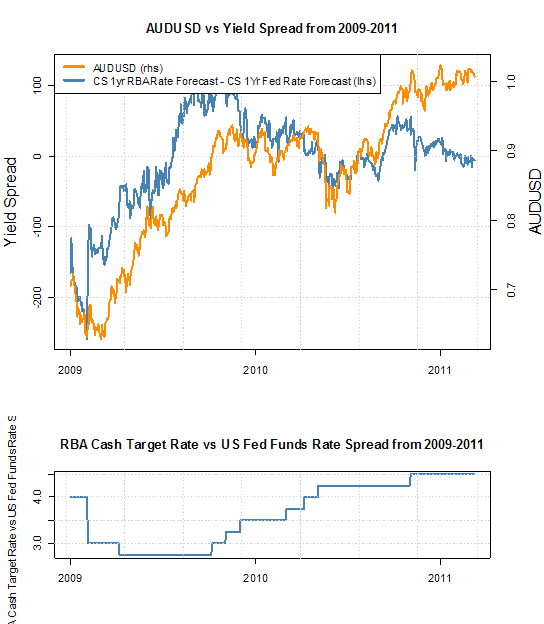 The Australian Dollar continues to benefit from the highest short-term interest rate of any G10 currency, and relatively muted forecasts for further interest rate hikes have had seemingly little effect on the high-flying AUDUSD. Indeed, the Reserve Bank of Australia is expected to raise interest rates by a relatively modest 30 basis points through the coming 12 months. Such a sum is actually less than the similarly tepid expectations for the US Federal Reserve. Of course, the AUD would still boast an impressive 445bp short-term yield advantage over its US namesake.

Interest rate expectations remain supportive of the AUDUSD, and it would take a substantial correction in either RBA or Fed rate forecasts to shift momentum in the US Dollar’s favor. 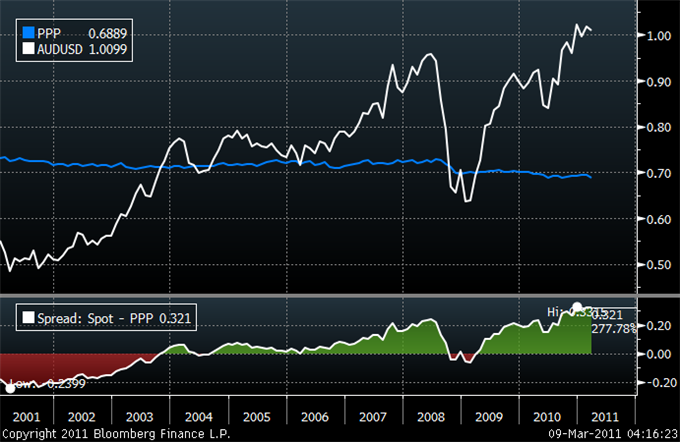 The Australian Dollar remains the most overvalued currency against its US counterpart, trading at a staggering 31.8 percent premium to its PPP-implied fair value. However, the fuel behind such performance came from an aggressively hawkish RBA, which now has clearly shifted gears into neutral. This seems to finally open the door for a significant reversal, with priced-in monetary policy expectations now pointing to a narrowing of yield differentials in favor of the greenback over the coming year. The makings of a slowdown in China – Australia’s top trading partner – and lingering worries about the Euro Zone debt crisis as well as turmoil in the Middle East add to downward pressure on the still sentiment-sensitive currency. While confirmation of a top remains elusive, a very attractive selling opportunity looks to be just around the corner.