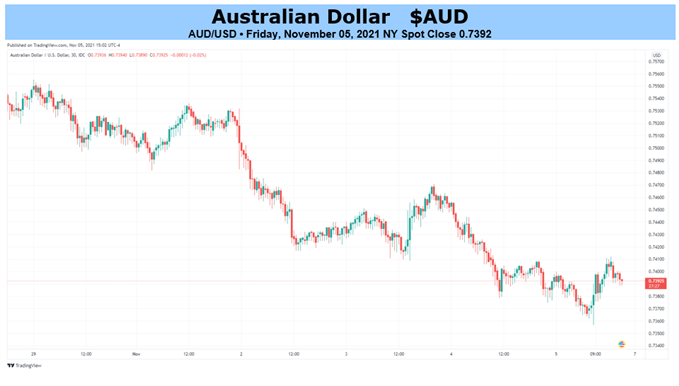 The RBA underwhelmed market expectations at their last monetary policy meeting. The market had already witnessed the abandonment of yield curve control (YCC) prior to the meeting.

This inaction was interpreted as a potential indicator of a shift in RBA thinking around inflationary impacts. This led to possible implications for other components of monetary policy.

Turned out, the market was wrong. The RBA confirmed YCC was no longer in play but as far as bond purchasing and rate hikes go, nothing to see here.

The RBA did successfully move away from a timeline of potential rate hikes though. The time frame for a hike was aligned with maintaining YCC. While 2024 is when they see rates lifting off, they may allow for hikes in 2023 if conditions warranted it.

In the background, commodity markets were under pressure. Iron ore and coal in particular sustained large moves lower.

In addition, the Fed and the Bank of England met, and the biggest surprise was that UK cash rates were not hiked. This saw significant US Dollar buying, pushing the AUD/USD lower.

From here, the fate for AUD/USD appears to be caught in a 3-way tussle between yields, commodities, and the US Dollar.

Bond markets have swung wildly in anticipation of central banks stepping back from super-loose monetary policy. That perception was smashed as central banks maintained their asymmetric bias toward growth, rather than fighting inflation.

The market may or may not have over-corrected to the low side on yields, but it’s hard to see rates going too far north when short-end rates are anchored to the floor.

Iron ore, Australia’s largest export, remains under sustained pressure due to soft economic data coming out of China. It traded below the equivalent of US$ 87 on China’s domestic exchange, from highs above US$ 200 earlier in the year.

Various prices tracking coal futures remain significantly below the highs seen last month. Weather in energy-vulnerable parts of the world may turn the tide on the downtrend, but it is early in the season and less likely for now.

The US Dollar continues to benefit from the heightened uncertainty between interest rates and energy markets. Further instability could see more support for ‘the big dollar’.

Looking ahead, after some business and consumer confidence numbers, the jobs data will be watched on Thursday for clues on any uptick from a partial exit from lockdown in October. 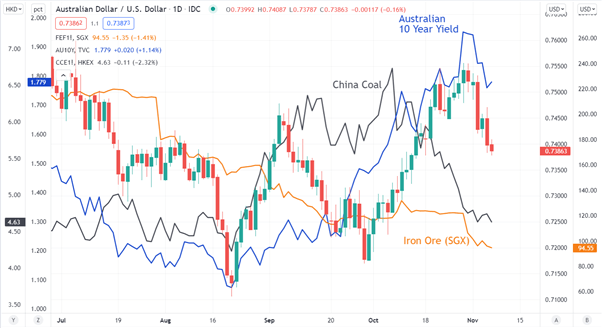