A marked pick up in New Zealand’s Consumer Price Index (CPI) may fuel the recent rebound in NZD/USD as it puts pressure on the Reserve Bank of New Zealand (RBNZ) to lift the official cash rate (OCR) off of the record-low.

Signs of faster price growth may push the RBNZ to alter the forward-guidance for monetary policy as ‘inflation is expected to gradually rise to our 2 percent annual target,’ and the central bank may drop its dovish tone over the coming months as ‘ongoing spending and investment, by both households and government, is expected to support growth.’

However, a below-forecast CPI print may produce headwinds for the New Zealand dollar as it curbs bets for an RBNZ rate-hike in 2018, and Governor Adrian Orr & Co. may continue to endorse a wait-and-see approach at the next meeting on August 9 as the central bank argues that the ‘best contribution we can make to maximising sustainable employment, and maintaining low and stable inflation, is to ensure the OCR is at an expansionary level for a considerable period.’ Sign up and join DailyFX Currency Analyst David Song LIVE for a broader discussion on current themes and potential trade setups!

New Zealand’s Consumer Price Index (CPI) narrowed to 1.1% per annum from 1.6% during the last three-months of 2017, with the weakness led by a slowdown in prices for discretionary items. A deeper look at the report showed the cost for footwear slipped 1.5%, with prices for clothing down 1.4%, while the cost for household appliances fel1 3.1% in the first-quarter of 2018.

The New Zealand dollar struggled to hold its ground following the lackluster print, with NZD/USD pulling back from the 0.7340 region to close the day at 0.7271. Learn more with the DailyFX Advanced Guide for Trading the News. 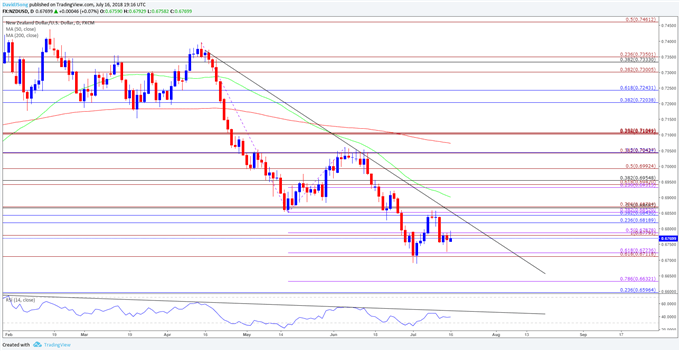