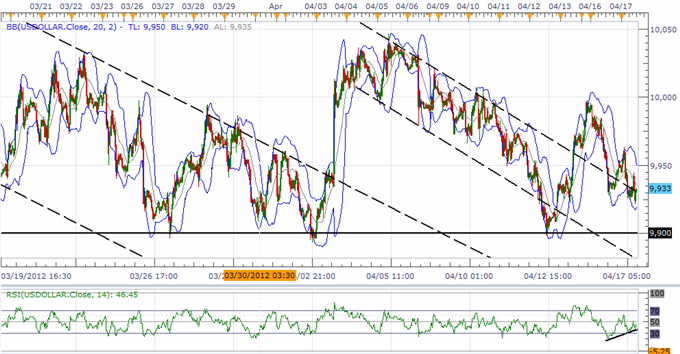 The Dow Jones-FXCM U.S. Dollar Index (Ticker: USDollar) is 0.12 percent lower from the open after moving 70 percent of its average true range, and we may see the reserve currency track lower over the remainder of the week as it trades back within the downward trending channel from the beginning of the month. However, we will be closely watching the 30-minute relative strength index over the next 24-hours of trading as there appears to be a bullish divergence in the oscillator, and the technical development certainly foreshadows a short-term rebound for the index, which should preserve support around 9,900. In turn, we may see the dollar regain its footing going into the middle of the week, but risk-trends are expected to dictate price action for the greenback as the economic docket remains fairly light over the coming days. 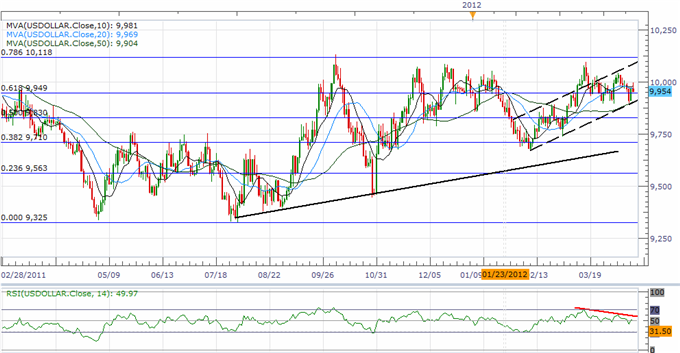 As the USDOLLAR struggles to hold above the 61.8 percent Fibonacci retracement around 9,949, the index appears to be threatening the upward trending channel from earlier this year, but we will maintain our bullish call on the reserve currency as long as 9,900 holds up. Indeed, the daily RSI paints a bearish outlook for the greenback as the downward trend continues to take shape, and we may see the dollar fall back towards the 50.0 Fib around 9,830 should the divergence continue to play out. As the G20 meeting in Washington comes into focus, the rise in market sentiment may gather pace over the coming days, and we may see market participants continue to move away for the reserve currency as global policy makers pledge to increase their efforts in addressing the risks surrounding the world economy. However, the group may struggle to meet on common ground as the euro-area seeks additional assistance from the global community, and we may see market participants scale back their appetite for risk should world officials fail to instill an improved outlook for the world economy.

Two of the four components advanced against the greenback, led by a 0.46 percent rally in the Australian dollar, which was following by a 0.19 percent gain in the British Pound. Indeed, the sterling extended the advance from earlier this month as sticky price pressures in the U.K. dampens speculation for more quantitative easing, and we may see the Bank of England Minutes push the exchange rate higher as the central bank continues to soften its dovish tone for monetary policy. Indeed, the shift in the policy outlook should prop up the sterling going forward, and the GBPUSD looks poised to mark fresh highs for 2012 as the upward trending channel continues to take shape. In turn, we anticipate to see the pound-dollar to make a run at the 23.6 percent Fib from the 2009 low to high around 1.6250, and we may see the sterling outperform against its major currency counterparts as BoE officials anticipate to see a stronger recovery later this year.