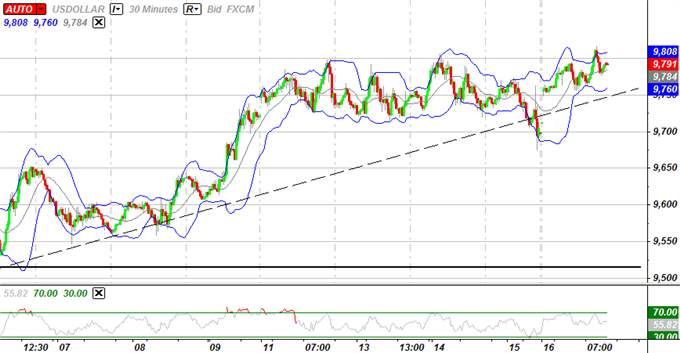 USD To Consolidate Ahead of FOMC, Aussie To Face RBA Minutes

The Dow Jones-FXCM U.S. Dollar Index (Ticker: USDollar) remains 0.85% higher on the day after moving 112% of its average true range, and the greenback may continue to consolidate throughout the remainder of the day as the relative strength index falls back from overbought territory. In turn, the index looks as though it will fall back towards the lower bounds of the Bollinger Band around 9755, but we may see the USD threaten the upward trend from earlier this month as the FOMC interest rate decision takes center stage. However, should price action hold above 9750, we may see the dollar index continue to retrace the decline from earlier this year, and the greenback may make a run at the April high (9887) as the flight to safety gathers pace. 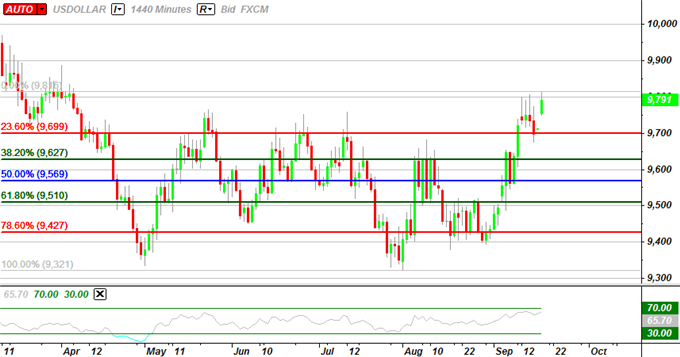 As the dollar index advances to a fresh monthly high of 9816, the rebound from the end of August (9395) may gather pace in the days ahead, but the greenback may consolidate ahead of the FOMC interest rate decision scheduled for Wednesday as the relative strength index approaches overbought territory. Indeed, the FOMC is widely expected to preserve the zero interest rate policy in September, but the statement accompanying the rate decision could highlight an increased willingness to expand monetary policy further as the world’s largest economy faces a slowing recovery. As the committee weighs additional policy tools to stimulate the ailing economy, speculation for further monetary stimulus is likely to sap demands for the reserve currency, and we may see a large correction in the USD as market participants diversify away from the greenback. However, should the Fed endorse a wait-and-see approach for the remainder of 2011, the bullish sentiment underlying the U.S. dollar may gather pace, and the index may continue to recoup the losses from earlier this year as market participants scale back their appetite for risk.

Three of the four components weakened against the greenback on Monday, led by a 1.66% decline in the Australian dollar, and the high-yielding currency may face additional headwinds over the next 24-hours of trading should the central bank continue to soften its hawkish tone for monetary policy. After keeping the benchmark interest rate at 4.75%, the Reserve Bank of Australia’s policy meeting minutes may highlight the ongoing weakness within the real economy, and the central bank may see scope to abandon its ‘mildly restrictive’ policy as growth and inflation taper off. In turn, the near-term reversal in the AUD/USD looks poised to gather pace over the near-term and the pair may threaten the rally from the previous month (0.9929) as market participants anticipate to see lower borrowing costs in the coming months. According to Credit Suisse overnight index swaps, investors see nearly 150bp worth of rate cuts coming from the RBA over the next 12-months, and the central bank may see scope to scale back the rate hikes from the previous year as the fundamental outlook for the isle-nation deteriorates.