Meanwhile, Ireland’s central bank said that the recovery in the Euro-Zone may “moderate somewhat” in the second-half of 2010 as governments operating under the fixed-exchange rate system tighten fiscal policy and target their budget deficit, and went onto say that “the risks to the growth outlook over the medium term appears on the downside, given the potential for the consolidation to have a bigger-than-expected impact on growth in both the euro area and the global economy more generally.”

As a result, the European Central Bank is widely expected to hold the benchmark interest rate at the record-low of 1.00% next week, and President Jean-Claude Trichet may continue to hold neutral outlook for future policy as he expects to see an “uneven” recovery paired with subdued price growth. Nevertheless, the economic docket showed household spending in Germany tumbled 0.9% in June amid forecasts for a 0.2% decline, while the unemployment rate for the Euro-Zone held steady at a 12-year high of 10.0% for the fourth consecutive month. At the same time, the CPI estimate for the region increased to an annualized pace of 1.7% in July from 1.4% in the previous month, which is the highest reading since November 2008, but the ongoing slack within the private sector paired with the weakness in the financial system is likely to weigh on price growth over the coming months as the Governing Council maintains a dovish bias for inflation.

The British Pound halted the six-day rally, with the exchange rate falling back to a low of 1.5551, but the GBP/USD appears to be holding steady ahead of the North American trade as price action continues to stay above the 200-Day SMA at 1.5544. However, as the daily RSI falls back from overbought territory, we could see a corrective retracement going into the following week, and a break below the 200-Day would certainly expose the 20-Day SMA at 1.5306, which coincides with the lower bounds of the upward trending channel from the June low (1.4346). Nevertheless, the Bank of England is anticipated to maintain its current policy at its rate decision next week, but we are likely to see the central bank refrain from releasing a policy statement, which would lead to muted British Pound price action following the interest rate announcement.

U.S. dollar price action was mixed overnight, with the USD/JPY slipping to a fresh yearly low of 86.15 as the Japanese Yen rallied across the board, and the reserve currency is likely to face increased volatility going into the North American session as the advanced 2Q GDP report is expected to show economic activity and private spending expanding at a slower pace from the first-three months of the year. The growth rate for the U.S. is forecasted to rise at an annualized pace of 2.6% after increasing 2.7% in the first-quarter, while personal consumption is projected to expand 2.4% following the 3.0% jump during the last period. At the same time, the Chicago Fed purchasing managers index is anticipated to fall back to 56.0 in July from 59.1 in the previous month, and the slower pace of growth in the world’s largest economy could fuel the rise in risk aversion as investors weigh the outlook for the global recovery. 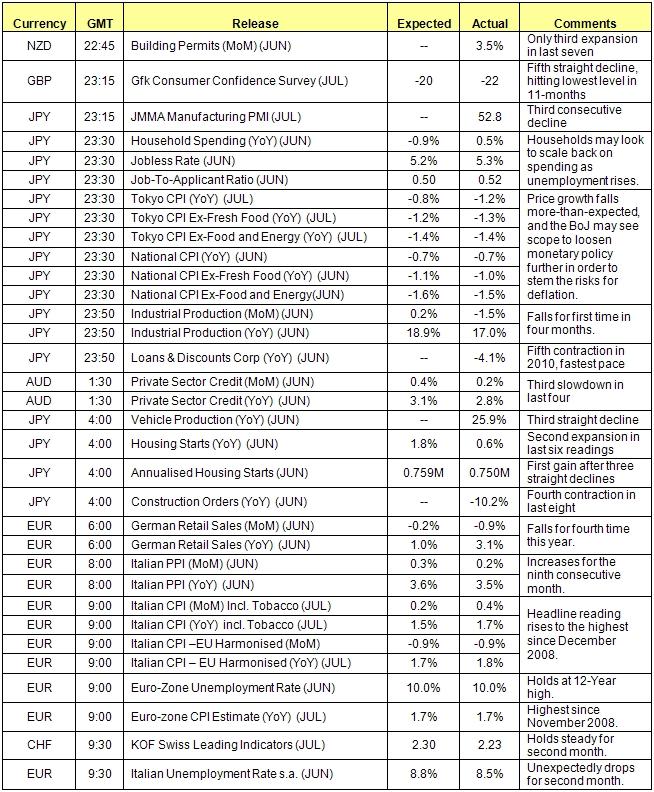