Meanwhile, the International Swaps and Derivatives Association (ISDA) created a group that will “explore the different scenarios in which a country may leave the euro zone and consider what legal and documentation issues could arise in each for the derivatives markets and what steps would be necessary in order to address them,” but went onto say that organization has “no view as to the likelihood of such an even occurring” according to an article in the Financial Times.

Nevertheless, a report by Germany’s Federal Labor Agency showed unemployment slipped 20K in July, with the jobless rate falling back 7.6% from 7.7% in the previous month to mark the lowest reading since November 2008, and the labor market is likely to improve going forward as businesses continue to expand production and employment. At the same time, a separate report European Commission showed its gauge for economic sentiment jumped to 101.3 during the same period from a revised 99.0 in the previous month, which is the highest reading since March 2008, while the business confidence index advanced to 0.66 in July from 0.40 in the month higher to exceed forecasts for a 0.39 clip. As growth prospects improve, the European Central Bank may raise its assessment for the economy and see scope to carry out its exit strategy going into the following year, but subdued price growth could lead the Governing Council to maintain a loose policy stance in the first-half of 2011 as the governments operating under the single-currency tighten fiscal policy and target the budget deficit.

The British Pound continued to advance against the greenback, with the exchange rate rallying to a fresh monthly high of 1.5662, and the GBP/USD may continue to trend higher throughout the week as price action holds above the 200-Day SMA at 1.5549. Meanwhile, the economic docket spurred a weakened outlook for the U.K. economy as mortgage approvals grew less-than-expected in June, with banks granting 47.6K loans amid forecasts for a 48.8K clip, while net consumer credit unexpectedly slipped GBP 0.1B during the same period after expanding GBP 0.3B in May. In addition, the nationwide home price index weakened 0.5% in July, which exceeded projections for a 0.3% decline, while values increased at an annualized pace of 6.6% to mark the slowest pace of growth since December. As the private sector remains weak, with households and businesses continuing to face tightening credit conditions, the Bank of England is widely expected to maintain its current policy at the rate decision next week, but the MPC may drop its dovish outlook as price growth continues to hold above the 3% limit for inflation.

The greenback weakened against most of its major counterparts, with the USD/JPY slipping to a low of 86.73, and market sentiment is likely to drive price action going into the North American session as the economic docket remains fairly light for Thursday. As a result, the reserve currency could face increased selling pressures throughout the day as investors unwind their safe-haven flows, but we may see a short-term consolidation in the major exchange rates as the advanced GDP reading scheduled for tomorrow is expected to show the world’s largest economy expand at an annualized rate of 2.5% in the second-quarter. 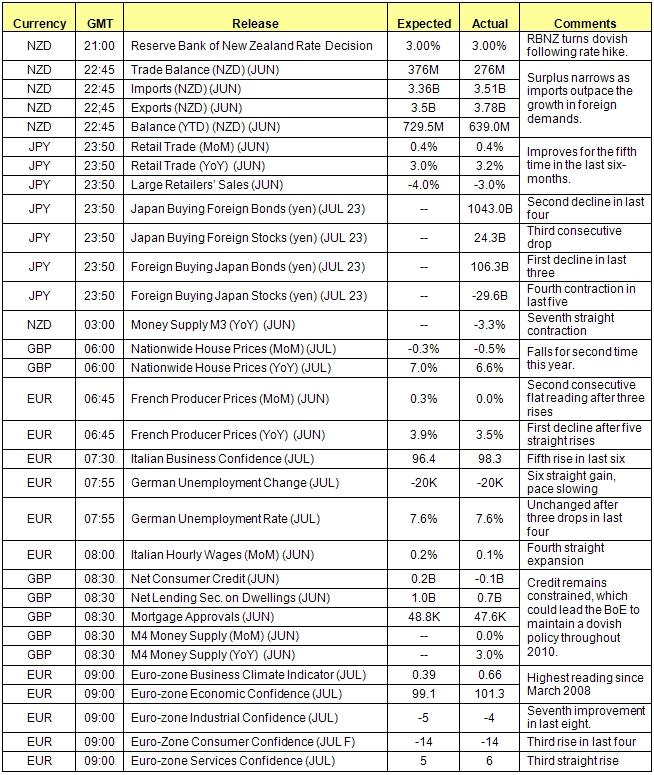