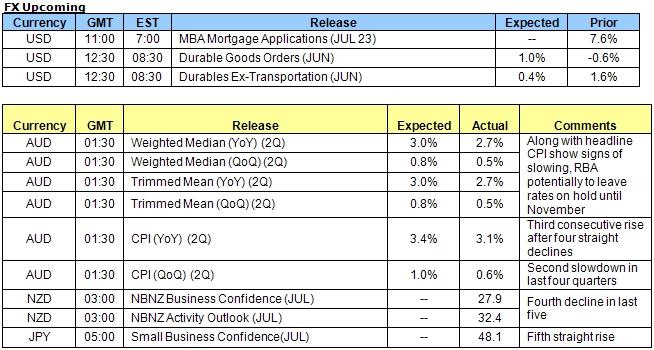 Meanwhile, a report by the European Central Bank showed lending in the region increased 11% in July after expanding 3% in April, but the ECB held a cautious outlook for the economy as commercial banks continued to tightening borrowing standards.

As a result, the central bank expects “credit standards on loans to enterprises to tighten somewhat in the third quarter” as the financial system remains fragile, and went onto say that the “negative spillover effects from the sovereign debt crisis appears to have worsened banks’ ability to obtain funding,” which is likely to persist over the coming months. At the same time, the Bundesbank talked down the risks for a credit crunch and said that demand for borrowing has increased “noticeable” in Europe’s largest economy, and noted “banks don’t share the fear that credit supply will be too restrictive for the German economy as the recovery continues.” However, as the governments operating under the fixed-exchange rate system plan to tighten fiscal policy and target the budget deficit, the lack of public support could hamper the recovery, which could lead the Governing Council to support the real economy throughout the second-half of the year. Nevertheless, Portugal sold EUR 600M of government debt maturing in 2014 with an average yield of 3.621%, along with EUR 681M of bonds due in 2023 yielding 5.377%, which compares to the 2.759% coupon for the 2014 bonds auctioned in November and the 4.416% yield for the 2023 bonds in January.

The British Pound pared the overnight advance to 1.5625 as the Bank of England held a mixed outlook for the U.K., but the GBP/USD may continue to track higher over the near-term as it looks poised to test the upper bounds of the rising trending channel from the June low (1.4346). BoE Governor Mervyn King said the 2Q GDP reading was “encouraging,” but expects the VAT change to keep the headline reading for inflation above the 2% over the medium-term, and went onto say that the MPC faces a “difficult” challenge as it aims to balance the risks for the real economy. In addition, the central bank head said that the remains “room” to move in either direction and pledged to take the “appropriate” steps going forward in order to encourage a sustainable recovery. As a result, the BoE is widely expected to maintain its current policy at its next meeting on August 5, but the MPC may look to switch gears over the coming months as it turns its focus on the risks for inflation.

U.S. dollar price action was mixed once again, with the USD/JPY holding above the 20-Day SMA (87.66) after falling back from a high of 88.11, and greenback may continue to lack direction going into the North American trade as equity futures are little changed on the day. Nevertheless, U.S. durable goods orders are forecasted to rebound 1.0% in June following the 1.1% drop in the previous month, while durables excluding transportation are projected to increase another 0.4% following the 0.9% expansion in May. As the outlook for future growth improves, the data could spark a rise in risk appetite, which would weigh on the reserve currency as investors scale back on safe-haven flows.